The two recipients in Italy at IADSA’s 2014 Annual Meeting were HongMin Xu, who heads the China Healthcare Association’s Information Exchange Committee and is Director of Regulatory Policies for Amway China.  Mr. Xu was presented the award for his exceptional work over many years in leading work to build a regulatory system to support the development of the Chinese market in food supplements.

The second award was presented to Peter Berry Ottaway who has been a key technical advisor to IADSA since its creation. He has represented IADSA in many key Codex Alimentarius committees and his experience and analysis of the technical-regulatory issues impacting the sector is world-leading.

Giving the awards, the outgoing Chairman of IADSA, Pete Zambetti, said: “These two individuals are both united in their tireless service to the sector and their exceptional abilities of analysis and guidance.  We are honored to recognize them as some of the most dedicated people we have had the pleasure to work with.”
Related Searches
Suggested For You 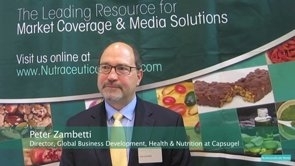