Organic food sales in the U.S. total around $40 billion annually, according to the Organic Trade Association. 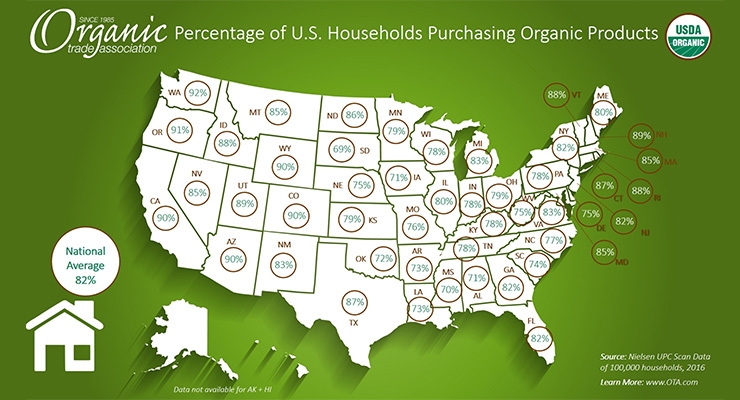 Organic products can now be found in the kitchens of 82.3% of American households, according to new Nielsen findings released by the Organic Trade Association (OTA). In the first comprehensive look at organic purchases by households on a state-by-state level, this nationally representative Nielsen study of 100,000 households conducted in 2015 and 2016 reported that more households than ever bought organic food on a regular basis throughout 2016. The national average climbed 3.4% from 2015 to 82.3%.

The results come as former Georgia Governor Sonny Perdue begins his confirmation process to become the next Secretary of Agriculture. In Georgia, the number of households buying organic rose by a solid 4% to 81.5 percent. The state showing the biggest jump in households purchasing organic was North Dakota, where 85.6% of households participating in the Nielsen study reported buying organic in 2016, up a robust 14.2% from 2015.

“These new findings show how important organic has become to millions and millions of American families everywhere—to more than 80% of our nation’s 117 million households (according to the most recent U.S. Census Bureau statistics), more than 80% of Georgia’s 3.5 million households, more than 85% of North Dakota’s almost 300,000 households,” said Laura Batcha, CEO and executive director of OTA. “The organic community is looking forward to working with the new leadership at USDA. We are eager to show how important adequate funding is to support a strong organic program and to help organic to continue to become a part of healthy diets of households throughout our nation—including Mr. Perdue’s home state and rural states from coast to coast.”

The Nielsen findings show a number of states in which 90% or more of households now buy organic on a regular basis, with even the lowest levels all hovering around 70%. The five states seeing the biggest increases in households reporting organic purchases were:

“Organic provides a healthy choice for consumers everywhere, and a profitable choice for farmers,” said Ms. Batcha. “The industry relies on a few critical public institutions to support this burgeoning industry, including the National Organic Program for global oversight and uniform standards and research investment targeted to organic production. Organic is fueled by consumers, and it thrives when USDA recognizes the importance of organic to rural economies and to rural households.”

In Georgia, a partnership between the Georgia Department of Agriculture and the non-profit group Georgia Organics has shown how investment into helping farmers wanting to go organic can make a difference.

“Georgia is becoming a bigger player in meeting the growing consumer demand for organics, thanks to innovative farmers, entrepreneurs, and excellent partners,” said Georgia Organics Executive Director Alice Rolls. “Georgia Agriculture Commissioner Gary Black has partnered with Georgia Organics on our 200 Organic Farms campaign to double the number of organic farms by 2020.  His relationship with Sonny Perdue no doubt will be influential on a number of fronts, including organic agriculture.”

Organic food sales in the U.S. now total around $40 billion annually, and account for around 5% of total food sales in this country. According to the Organic Trade Association’s 2016 U.S. Organic Industry Survey, total organic food sales in 2015 were $39.7 billion, up 11% from the previous year. This spring OTA will be releasing its 2017 industry survey, which will look at the U.S. organic market in 2016.

The Nielsen data comes from 100,000 participating households in the 48 contiguous states that are geographically and demographically diverse to represent the national population. Participating households record with a home scanner all food purchases for in-home consumption from any retail outlet, including organic items. Participants scan the Universal Product Codes (the bar codes that cashiers scan at the supermarket) to track their purchases. Nielsen has been tracking food purchases with its home scanner household panel since 2002.
Related Searches
Related Knowledge Center
Suggested For You