The study found the annual financial savings achievable through use of omega-3 supplements varied between EU member states.

More widespread, regular consumption of omega-3 dietary supplements could save healthcare systems and providers in the EU a total of €12.9 billion a year, according to an independent study commissioned by Food Supplements Europe.

Using existing published literature and official data, researchers at Frost & Sullivan explored the financial benefits of the consumption of omega-3 EPA and DHA supplements among people aged 55 and older. This demographic group, representing 157.6 million people, or 31% of the total EU population, is considered to be at high risk of developing cardiovascular disease (CVD).

However, the Frost & Sullivan analysis indicated that more widespread daily consumption of 1,000 mg of omega-3 EPA and DHA fish oil among individuals aged 55-plus would result in more than 1.5 million fewer CVD-attributed hospital events across the EU between now and 2020, generating total cost savings of €64.5 billion, or €12.9 billion per year.
The results of the study were detailed in a new report, “The Healthcare Cost Savings of Omega 3 Food Supplements in the European Union.”

“This healthcare cost savings study shows very clearly that billions of euros could be saved by encouraging people aged 55-plus to use omega-3 food supplements regularly to reduce their risk of developing CVD,” said Food Supplements Europe Chair Ingrid Atteryd. “Communicating this message through official advice at both EU and national level, as well as via healthcare professionals and the media, could have a major positive impact on people’s well-being, while also significantly cutting the cost burden on healthcare systems and providers.”

The study found that the annual financial savings achievable through more widespread regular use of omega-3 supplements varied between EU member states. The biggest economic benefits would be seen in Germany, which could avoid costs of €3.86 billion per year, according to the research findings.

The omega-3 healthcare cost savings study was commissioned and funded by Food Supplements Europe but conducted independently by Frost & Sullivan, which autonomously developed the methodology to calculate the cost savings. Ms. Atteryd added, “This was an objective study, based on official data, conducted professionally by an independent research team using rigorous methodology and analysis techniques. It carries a powerful and compelling message, which shows that omega-3 food supplements have the potential to be a real force for good.”

She concluded: “Our chief aim is to create a more favorable regulatory and commercial environment for food supplements in the EU, through demonstrating the highly positive role they can play in promoting good health and reducing healthcare costs. This new report is a further step on that journey—and a very important one.”

GOED Publishes EPA & DHA Intake Recommendations
Meanwhile, after several years of discussion, the Global Organization of EPA and DHA Omega-3s (GOED) has set its own daily intake recommendations for EPA and DHA omega-3 fatty acids. The recommendations come after careful review and consideration of other international standards to assure scientific validation. GOED’s recommendations are:
Related Searches
Related Knowledge Center
Suggested For You 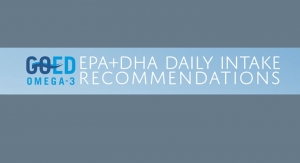 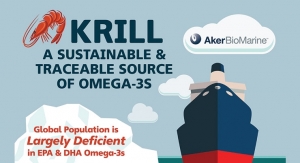