Organic India: Spiritual Seekers Getting Down to Earth

The company’s two founders immersed themselves in environmental, agricultural, and social recovery in India’s farming communities. 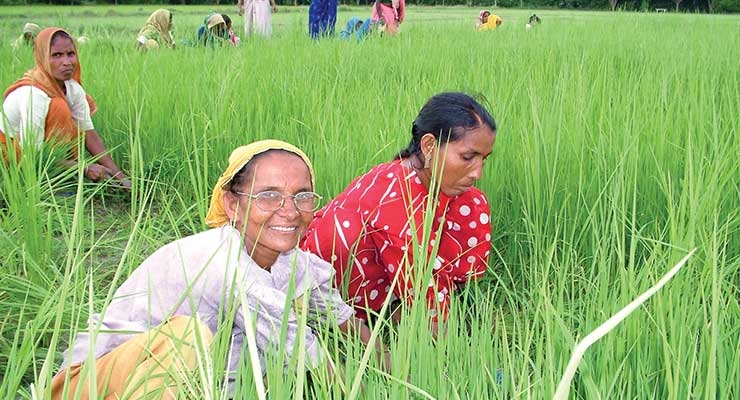 India’s farming landscape was transformed rapidly in the mid-20th Century, following the government-sponsored Green Revolution, which aimed to industrialize agriculture in tandem with the population boom to maintain food availability per capita, while additionally maintaining a self-sufficient agricultural economy in India.

The Green Revolution’s initial few years in India were very prosperous, and a clear majority of India’s food was produced domestically at one point. However, unsustainable agribusiness practices left rural communities with depleted water tables and barren farmland.

Ironically, the Green Revolution affected India in such a way that it left tens of thousands of farmers ruined. They accrued insurmountable loan debts, or debts directly to the multinational corporations that provided them with high-yield seeds unadaptable to the region, and a collection of fertilizers and pesticides which depleted soil of its nutrients. Ultimately, most of India’s farmland was under foreign ownership, and its forests were toppled and degraded, undermining the interests of devastated farming communities central to Punjab and other regions.

On a Mission
The historical pretext and contemporary consequences associated with the Green Revolution in India are largely what spurred two Ayurveda students, Bhavani Lev and Bharat Mitra, to found a company called Organic India in the early 1990s.

The company’s mission statement is to provide genuinely organic Ayurvedic products and solutions, and to be a “vehicle of consciousness” in the global market by creating a holistic, sustainable business model which inspires, promotes, and supports well-being and respect for all beings and nature.

Organic India’s founders worked under the tutelage of a Hindu sage and spiritual leader, H.W.L. Poonja, or “Papaji,” in Lucknow. Papaji was influential in Organic India’s vision to maintain an environmentally regenerative business model, and mutually beneficial partnerships with members of India’s farming community.

Regeneration
The founders originally set out to manufacture tea made from Tulsi, also known as holy basil, which has been used as an adaptogen in Ayurvedic medicine for thousands of years. Farmers, however, found the prospect of growing anything other than food, especially a ubiquitous native plant, to be absurd at face value.

Lev and Mitra were turned down by all but one farmer, who agreed not only to sell all of his Tulsi crop to the founders, but also to eventually meet the requirements for organic certification.

More farmers eventually partnered with Lev and Mitra, who in turn introduced them to environmentally regenerative practices which were sparsely employed in the agricultural community they worked in.

“As farmers began to recover financially, they were able to exit the cycle of crop failure, debt, and poverty to become self-supporting,” Gil continued. “The founders contributed healthcare facilities and schools to farming communities, and as a result, villages stabilized, then began to thrive. Farmers, their families, and their communities recovered their personal dignity and self-respect. The farmers are self-supporting and do not rely on aid or charity, and have been the instigators of sweeping environmental recovery throughout the region.”

The fledgling company worked exclusively as the first providers of Tulsi tea on the market, before eventually expanding its Ayurvedic catalog. Tulsi has a history spanning millenia as an Ayurvedic household staple.

Truly Organic
While Tulsi tea remains Organic India’s flagship product, the company also employs farmers to produce Ayurvedic fruits traditionally used in tonics including triphala, amla, bibhitaki, and haritaki fruits. These four fruits are not only certified organic, but they are what Organic India CEO Miguel Gil described as “legitimate organic”—all four fruits are grown and gathered across 500,000 acres of forest certified by the Indian government as organic, in a process known as wild crafting.

On the topic of compounding growth of organic products in a plethora of market segments, Gil expanded on the ubiquitous nature of the organic label, and the potential for consumer confusion about what organic means due to a lack of clear education.

“Clearly there are financial incentives for other companies to enter the organic space,” Gil said. “While overall, we consider this a positive thing, more companies going organic, there is also the potential for consumer confusion and ‘greenwashing.’”

“We see the need for intensive consumer education to inform the public that textured, rustic package design and folksy copy can be misleading, and inform them as to how to identify true certified organic products as opposed to ‘greenwashed’ brand items,” Gil continued.

But, Gil said, those leading the company believe that going fully organic is well worth the initial heavy investment.

“Expect the unexpected! You’ll see us evolve in ways that serve our vision to be a vehicle of consciousness in the global marketplace,” Gil said. “This means building and regenerating ecosystems—environmental, social, and business.”

Standard Setting
Additionally, the company participates with Fairtrade America, an international non-profit organization based in Washington, D.C. founded to advocate for financial equity in global supply chains, and serve as a certification board for companies willing to adhere to its standards which are geared toward providing better economic opportunities for farmers and product providers. Organic India recently debuted its first Fairtrade Certified supplements, including Ceylon cinnamon, Tulsi, Trikatum, and Ginger, to the market in late 2019.

In recent years, Organic India has garnered several commendations for its regenerative agricultural practices, which employ about 3,000 farmers to date.

2018 and 2019 yielded the company, a Certified B Corporation, with consecutive “Best for the World Overall” awards, placing it in the top 10% of all B Corporations, with an exceptional score in the “Supply Chain Poverty Alleviation” designation category.