Following a recent study published in JAMA Internal Medicine that found high consumption of supplemental calcium was associated with increased risk for cardiovascular disease deaths among men (but not women), an additional study published in the British Medical Journal suggested that high calcium intake in women was associated with higher risk of death from all causes—especially cardiovascular disease.

In light of these studies, the U.S. Preventive Services Task Force (USPSTF) has recommended against daily supplementation of vitamin D and calcium for the primary prevention of fractures in postmenopausal women. Industry stakeholders have responded with criticism and concern. In a statement, the USPSTF concluded the following:

Dr. Cara Welch, senior vice president of scientific and regulatory affairs, with the Natural Products Association (NPA), Washington, D.C., said the association believes “dietary supplementation is both safe and effective for anyone who isn’t getting enough calcium and vitamin D from their diet. These nutrients have been shown to support bone health and it’s important that consumers get the recommended levels of both. If diet alone isn’t enough, then dietary supplements can help with getting these vital nutrients.” She went on to say the USPSTF’s conclusions conflict with the Institute of Medicine’s recommendation, which took into account nearly 1,000 published studies that confirm the role of calcium and vitamin D supplements in promoting bone health.

The Council for Responsible Nutrition (CRN), Washington, D.C., said task force recommendation represents a “limited review of the literature” and could result in “widespread confusion for consumers who already are not getting enough calcium, and who further could benefit from the growing body of research that demonstrates multiple reasons to take vitamin D.” The USPSTF recommendations should be further reviewed and discussed within the scientific and medical communities before consumers jump to change their supplementation habits, CRN added.

In light of the USPSTF’s controversial recommendation, experts are speaking up about the importance of magnesium in the body’s utilization of calcium and vitamin D. According to Carolyn Dean, MD, ND, magnesium expert and Medical Advisory Board member of the non-profit Nutritional Magnesium Association, “adequate levels of magnesium in the body are essential for the absorption and metabolism of vitamin D and calcium. Magnesium converts vitamin D into its active form so that it can help calcium absorption and help prevent clogged arteries by drawing calcium out of the blood and soft tissues back into the bones where it is needed to build healthy bone structure.”
Related Searches
Related Knowledge Center
Suggested For You

Vitamins: The ABCs & Beyond 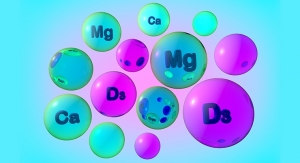