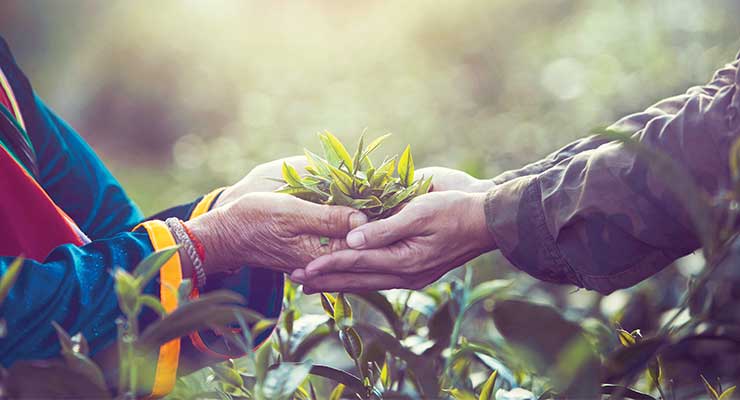 Since its recent founding, the Sustainable Herbs Program of the American Botanical Council has been serving as a source of advice for herbalists, companies, and consumers.

Just as much a resource directed at herbal companies, it also seeks to serve as a leading advocate for a mounting consumer movement that demands more sustainable and equitable business practices across global supply chains for medicinal plants. It serves to provide all stakeholders—consumers, companies, harvesters, and herbalists—with an accessible channel of information needed to carve out a sustainable, fair trade pathway for producing and selling herbal remedies.

Roots
The concept of the group’s mission began a few years prior to its founding. Two filmmakers, Ann Armbrecht, PhD, and Terrence Youk, set out to co-produce an anthropologically-centered documentary, “Numen: the Nature of Plants,” in which they explored the history surrounding human use of herbal remedies and modern conflicts that have arisen throughout the herbal supply chain in harvesting, business practices, storage, adulteration, and more.

The film examines the deep history of herbal use in the U.S. leading up to the advent of modern pharmaceutical interventions, which resulted in a profound detachment between people and the role of plants traditionally used for food and medicine.

Also concerning to the filmmakers, beyond the debate over pharmaceuticals vs. botanicals, are problems endemic to the herbal industry today that exist among some of the most prominent regional cultivators of quickly-depleting, finite supplies of medicinal plants around the world.

“Numen was about eastern herbalism, and in the beginning we had a short segment that looked at social and ecological responsibility in the herb industry,” Armbrecht said. “We interviewed some companies including Traditional Medicinals and New Chapter among others, but we realized it was way too deep of a topic for a segment or a standalone, and it was something I really wanted to come back to.”

Flourishing Interest
The film drew praise from some of the herbal industry’s key players who oversee global herbal supply chains that have received noteworthy fair trade, quality, and environmental certifications. Armbrecht and Youk believed it was still necessary to take a deeper, transparent look at some of the widespread issues at play within the often secretive industry.

“I realized that it was really valuable to see the herbal industry behind the scenes and that video would be one compelling way to share it,” Armbrecht said. “When I got back [from visiting FairWild certified sites in Europe] I raised about $60,000 through a KickStarter campaign, fueled by interest coming from the industry itself. People are deeply invested, and really want to understand the philosophy of herbal medicine and to know where herbs come from. My husband Terry and I went back to Europe, to India, and to some small farms in the U.S. to do some segment videos on the different steps in these processes, which led to the Sustainable Herbs Project, known today as the Sustainable Herbs Program.”

Armbrecht and Youk began to showcase the rigor behind the industry’s best practices for maintaining an environmentally and socially responsible presence. What began as a series of consumer-directed short videos providing a rundown of FairWild sites eventually transitioned to a multimedia platform with the support of the American Botanical Council, a non-profit organization likewise centered around educating the public and the industry on herbal medicine. While it still provides information through a documentarian lens, Armbrecht said that SHP’s focus has shifted to providing guidance in a way that’s accessible to people on all steps of the supply chain. The SHP today presents documentaries, literature, and more direct discussions to the litany of actors involved in the global herb supply.

“We always wanted to expand the number of voices we could share. While we started out more consumer-directed, our partnership with the American Botanical Council has really helped me begin to create more content that was helpful for the industry, and people who are steeped in these issues,” Armbrecht said. “While this is now an American Botanical Council Program, our goal has always been to bring more sustainability to the industry; and while consumers are a part of it, it’s ultimately up to visionary companies to see it through. And because the American Botanical Council operates much more in that world it’s helped me to collaborate more with the industry, and it’s helped us to bring more rigor to our content. They’re very thorough in a good way, and it’s deepened what we’re able to provide.”

Since its founding, the Sustainable Herbs Program has provided an ongoing flood of information about the good, the bad, and the ugly in the contemporary herbal industry as told in large part by first-hand experiences Armbrecht and her team have had traveling up and down supply chains of various plants. SHP’s goal is not to provide a characterization of the herbal supplements industry as “good” or “bad” in any way, but rather, to guide those involved in making it an industry with greater holistic benefit. It is ultimately a response to the fact that neither consumers nor companies have a one-stop walkthrough to help navigate environmental and social issues.

The program provides a wide range of field manuals for industry stakeholders to learn about how to promote a higher degree of health and standards for both humans, the environment, and the species people depend upon.

These perennial, step-by-step walkthroughs can be used to determine whether any product in particular adheres to quality and ethical standards, with literature and a series of videos breaking down the decisions companies and suppliers make in production, processing, quality control, manufacturing, and more. These multi-part series sometimes cover best practices for the whole industry; at other times they address specific issues that apply to popular medicinal species, and the index is continuously growing.

SHP’s Toolkit: A Must-Read
Where does a company start on its journey to becoming more sustainable, given the many steps to take and factors at play? In recent news, the Sustainable Herbs Program has launched a 14-section, 52-page Sustainability and Regenerative Practices Toolkit, available free of charge, showcasing exemplar practices that show stewardship to the planet and the communities in developing agricultural regions, through videos, case studies, and periodic webinars with experts on specific topics. Other practical resources are intended for businesses at any size and at any stage of operation.

With input from several leading herbal organizations, and a long list of further reading material aligned with sustainability and fair trade, the toolkit provides a guide informed not by conventional cost evaluations. It takes into account remediating costs to everything from stakeholders and consumer trust to biodiversity, topsoil, water, and wild plant populations. Since the toolkit is a compendium in and of itself, Armbrecht said the Sustainable Herbs Program will begin introducing it to industry by packaging more specific segments of it as part of the outreach attached to the publication.

Local Flair
The Sustainable Herbs Program also links up with many other sustainability organizations to spotlight practices specific to regional herbs. The most recent public awareness campaign, Forest Botanicals Week, was a joint project with non-profit organizations including Appalachian Sustainable Development, providing insights into a community of forest farmers seeking out wild-grown ginseng, goldenseal, and black cohosh, as well as several other edible and craft plants local to the mountain range.

For localized initiatives, such as the Appalachian Harvest Herb Hub, The Appalachian Beginning Forest Farmer Coalition, and the Forest Grown Verification Program, being able to catch the ear of the broader herbs and botanicals community is much needed and hard to come by. Fostering discussions such as these promote forest agriculture and its preservationist impact to those sourcing herbs and botanicals from other regions of the world.

As a collaborator, Armbrecht seeks out many companies and organizations that hope to leverage certain sustainability issues into a broader limelight.

“What we look for in partnerships is a shared commitment to particular issues,” Armbrecht said. “Appalachia, for example, is where the native botanicals of the United States largely come from, and that supply chain is worse than many other supply chains in other countries. I had been interested in collaborating for some time to bring more support there, to work toward better wages for forest farmers and ensuring that there is a focus on sustainability. There’s a long history of work behind the Appalachian Forest Farmer’s Coalition to bring these issues forward.”

Looking Ahead
On what impact the COVID-19 pandemic might have upon sustainability efforts within the herbs and botanicals industry, Armbrecht said she remains cautiously optimistic that the crisis could serve as an opportunity for an industry to reemerge with systems more suited to responding to catastrophes that exist in farms, forests, supply chains, and beyond.

Many sustainability organizations aligned to varying extents with the herbs and botanicals industry believe that despite economic hardships, abundant consumer research shows sustainability still wields heavy influence over purchasing habits in this marketplace and others. While only time will tell how financial sensitivity and ethical shopping habits may shape the trajectory of sustainable solutions, Armbrecht said she is hopeful the pandemic can serve as a platform for the cause.

“The thousands of people taking part in all of the online programming that’s going on around the world view this as a chance,” Armbrecht said. “We know that the world can come to a stop when something is serious enough, and we believe we can capitalize on this to create systems that respond to climate change, care for the environment, and care for humans, and that gives me hope. Some people predict that there won’t be any positive impacts on the push for sustainability. I believe there are truths to both; as consumers, we’re probably even more concerned about these issues, but, as companies coming out of a crisis there are probably some heightened concerns over the bottom line at play in this as well.”

As the fair trade and ecological movements continue to forge ahead, the Sustainable Herbs Program will continue to be an abundant source of insight for companies working at the intersection of the two.
Related Searches
Related Knowledge Center