Ancient Roots with a Flourishing Future

Experts expect ashwagandha to continue to rise in rank among other products in the adaptogen market. 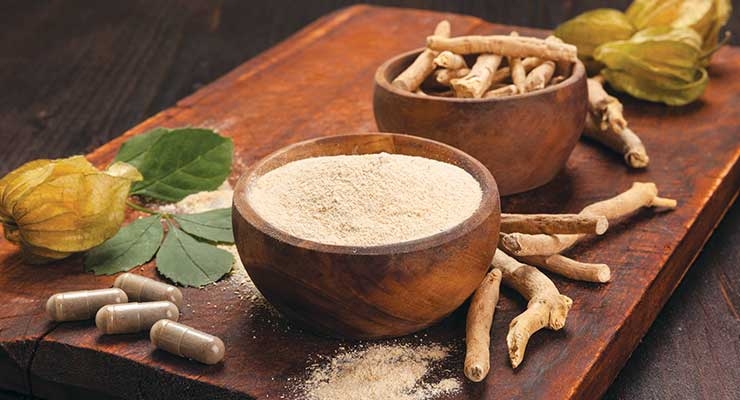 Ashwagandha, one of the most widely-regarded ingredients in traditional Ayurvedic medicine, has been generating unprecedented buzz for the past several years, especially in the U.S. The fruit-bearing herb is indigenous to northern Africa, India, and several other Asian and Middle Eastern regions.

The adaptogen has been cultivated for its roots, for thousands of years, and many of its suggested applications and benefits for contemporary consumers are the same as those touted since prehistory.

Like other adaptogen counterparts, ashwagandha is believed to aid the body in its reaction to physical and emotional stressors in a highly dynamic way.

These ancient claims about the herb have piqued the interest of contemporary researchers over the lastage of medicinal herbs. several years, who have carried out several clinical studies to test the scientific merit of attributes discussed by the ancients.

Additionally, Shaheen Majeed, president worldwide, Sabinsa, said that “research shows it decreases cortisol levels in persons under stress, restores healthy adrenal function, and normalizes the sympathetic nervous system. It has demonstrated anxiolytic activity, which relieves stress and anxiety. It is also an efficient immunomodulator that can help with mood swings and the management of related issues. Recent research suggests ashwagandha shows promise for health benefits in sports nutrition, memory and aging, immune support, and many more applications.”

An array of clinical trials can be seen as part of the reason the polymathic adaptogen is seeing burgeoning consumer appeal—research supports its growing applications as an all-encompassing booster for mood health and resilience.

It’s a flagship in the world of Ayurveda, which involves a range of medicines and natural therapies, said Kartikeya Baldwa, CEO of Ixoreal Biomed Inc, which markets KSM-66 Ashwagandha. “Ayurveda offers ashwagandha, turmeric, ginger, bacopa and thousands of herbal remedies, plus dietary practices, various form of massage, and more. This is true for TCM, European phytotherapy, and other cultural practices. It is all part of the expanding knowledge of the healing powers of nature.”

The Renaissance Plant
Experts in the ashwagandha market offered their perspectives about why the adaptogen is taking off at significant rates.

“The number of human clinical trials evaluating ashwagandha’s multiple health benefits is growing yearly,” Abedon said. “It is easy to formulate with and can be used in multiple applications and delivery systems. Many ashwagandha ingredients are priced lower than other adaptogenic ingredients, allowing products that contain ashwagandha to be more affordable to consumers than some adaptogen counterparts. Finally, most ashwagandha ingredients meet the current industry standards of being gluten-free, vegan, and not genetically modified through the use of modern biotechnology. Some are also offered with a certified-organic option.”

“In sum, consumers are interested in validating the traditional practices with modern science,” Bruce Brown, president of Natreon, said. “The consumer is positively responding to new applications and delivery forms that contain ashwagandha, and the health benefit claims that they contain resonate. Calm, mood, sleep, stress are all ever-important factors in consumers’ perception of a healthy lifestyle, and clinically studied and validated ashwagandha such as Sensoril delivers on these factors.”

Majeed said that in addition to having a plethora of functionalities, ashwagandha’s diverse use as an ingredient in functional foods and beverages contributes to it becoming so ubiquitous.  “Global awareness of the therapeutic properties of ashwagandha coupled with a broader range of offerings such as dietary supplements, sports nutrition products, beverages, bars, and snacks, are supporting growth in the global market,” he said.

Baldwa said one exciting development is research on female sexual health, function, and satisfaction. “While pharmaceutical companies search in vain for the so-called ‘female Viagra,’ we have it with ashwagandha.”

Rooted in Science
Investment in clinical trials has been a crucial foundation for several ashwagandha manufacturers worldwide. Continued growth will be more likely if new scientific revelations continue to generate buzz among companies and consumers alike.

“Clinical research is something that Natreon continues to invest in,” Brown said. “Sensoril Ashwagandha has a strong portfolio of 12 clinical studies with critical findings for stress, sleep, mood, sports nutrition, and cortisol reduction. As of recently, Natreon is investing in expanding the clinical research of Sensoril to other categories such as sports nutrition, women’s health, joint health, and gut health. Sports nutrition is a focus for Natreon’s Sensoril Ashwagandha as it becomes an important market segment. Natreon’s most recent study conducted at the Center for Applied Health Sciences (CASH) showed improvements in measures of strength without increasing testosterone levels.”

“Though there are other medicinal herbs that have adaptogenic properties, ashwagandha is one of the most researched and validated through clinical studies,” Majeed said.

Innovations Are a Must
Just as important is continuing to innovate in response to what research reveals. The functional foods market segment offers plenty of room for new passengers to board the ashwagandha bandwagon.

Other top trends that ashwagandha companies intend to hone in on are much in line with what market research firms consider to be top food trends this year. Innova Market Insights noted top consumer trends included storytelling (Ayurveda is a tradition dating back millennia), sustainability (ashwagandha is plant-based and often organic), and functional foods (its use as an ingredient is on the rise).

“Over the past 20 years, several ancient medical systems have been studied, validated, and integrated with Western medicine under the term Complementary or Integrative Medicine,” Majeed said. “Traditional Chinese Medicine and Indian Ayrvedic systems have had the most validations, which has usage of medicinal herbs.

As people have looked for more natural approaches to supporting their health, these ancient systems have appealed to many.”

“We believe we are just at the beginning phase of growth for ashwagandha. Some would argue it is on the verge of becoming the next curcumin in the plant-based ingredient market,” Brown said. “Consumer preferences continue to evolve toward natural, sustainable, plant-based solutions for their health needs. Ingredients like Sensoril Ashwagandha deliver on these consumer preferences, while also ensuring the desired health benefit outcomes through extensive clinical research.”

“We are also seeing growth in the use of ashwagandha in sports performance applications, a segment which continues to grow at attractive rates,” Abedon said.

In addition to addressing fatigue, testosterone levels, endurance, and strength in a number of clinical trials, ashwagandha has also been shown to support healthy joints, which bridges the healthy aging and sports nutrition market segments.

Trends toward Ashwagandha use for supporting healthy aging among men are also taking place.

Abedon said that, of recent clinical studies, he was most excited about a trial earlier this year which found that 43 aging, overweight males who took 21 mg of ashwagandha extract daily for 16 weeks had significantly greater levels of DHEA and testosterone compared with those in a placebo group.

“There were also trends in improving levels of fatigue, vigor, and psychological well-being in the ashwagandha group, although these changes were not significantly different than placebo,” Abedon said. “While the researchers described this as a preliminary study, the results indicate that consumption of ashwagandha extract may support male health in an aging population.”

Just as important is making sure consumers are up to date on why ashwagandha is tried and true, Baldwa said. “What will make the difference in terms of rate and size of growth is education. The more of that, the bigger the growth. Companies that fail to educate are foolish. Companies that drive research for one adaptogen over another help to establish higher position for that product in the market.”

“Following the clean label trend, consumers demand insight on sourcing, scientific validation, and product standardization to ensure quality in all aspects of the products they purchase,” Brown said. “Ingredient suppliers should work with brand marketers to ensure scientific validation of the ingredient sourced, along with the proper composition of bioactives that support the health benefits of the label claims.”

Abedon shared similar sentiment about the importance of cGMPs. “Some quality issues that may arise for some producers of ashwagandha ingredients are adulteration of the desired plant part (e.g., root) with a non-desirable plant part (e.g., stem), or with non-ashwagandha contaminants; use of older raw material that may contain lower bioactive content; or following less rigorous manufacturing practices that may not meet U.S. regulatory guidelines,” Abedon said. “At Innophos, we take pride in the fact that all of our suppliers, including those that supply ashwagandha, are required to pass our rigorous qualification program that ensures they are following best practices so only the highest quality ingredients are produced.”

The U.S. Pharmacopeia has established standards to authenticate ashwagandha, Majeed said. His biggest concern was also the adulteration of bioactive root ingredients with aerial parts of the same plant, and possibly other plant parts bearing resemblance to the root.

“The standard methods include microscopic (cross sectional analysis), macroscopic (observation for color, roots, and root hairs), high-performance thin-layer chromatography (HPTLC), and high-performance liquid chromatography (HPLC) methods (for withanolides and withaferin),” he said. “The quantification of flavonol glycosides shows the presence or absence of aerial parts in the ashwagandha extract. This is the method Sabinsa uses to demonstrate the authentic identity of our Shagandha ashwagandha ingredient.”

While all manufacturers are concerned on the whole about product integrity, Baldwa doesn’t necessarily believe it’s at the forefront of consumers’ minds, and rather, what can be easily understood are results. “Consumers do not know cGMPs any more than they know rocket science. Let’s be real about that. Consumers want results,” Baldwa said. “Give them something that helps them to sleep, gives them energy, or sharpens their mind and you have accomplished the mission. A small group of curious and well-informed people will know about traditional methods, but most people do not. They want products that meet their needs.”

Nonetheless, “Providers of ashwagandha who do not cultivate the plant themselves cannot know everything that has been done with the root and are at a disadvantage,” Baldwa added. “Vertically integrated companies can maintain the best controls and know more about their product. Processing with clean, green technologies without toxic solvents is essential.”
Related Searches
Related Knowledge Center