Quality Focus: A Riddle Wrapped in an Enigma, Shrouded in Mystery

The puzzle around the need to validate chemical identity methods without an actual validation protocol needs to be addressed.

In compiling information on approaches to establish identity of botanical materials I turned to a resource cited in my column “Identity Out of Focus: Meeting the new GMP requirements for identity testing”  (April 2008)—the 1999 FDA Food Safety Advisory Committee (FAC) Dietary Supplement Working Group report on identity. However, I was shocked to discover the link is dead, gone, vanished, kaput.

Contacting the agency to recover the report resulted in referrals to everything from the interim final rule on identity testing and the preambles of the 2007 GMP rule to transcripts of the 1999 meeting, but no actual report. It was as if the 1999 report had never existed. What happened? Fortunately, a resourceful and highly valued colleague was able to locate an electronic copy. I wondered, though: why the sudden disappearance of this resource? Never one to turn aside a good mystery, I began to reexamine the FAC report and my identity column to look for clues.

Certainly there were some areas that might cause concern. In retrospect, I was presumptuous when noting,  “Even if you can definitively differentiate Actaea pachypoda from racemosa, this may not be sufficient if your master manufacturing record specifies isopropanolic extract of Actaea racemosa spray dried onto maltodextrin. FDA will require you to take it one step further and ensure you can differentiate your product from an ethanolic Actaea racemosa extract spray dried onto rice powder.”

It is not at all clear that FDA was thinking about proving the identity of a particular type of extract made in a particular way, rather than the identity of the plant from which the extract was made. I can hear a collective “D’oh” upon realization that identity is not identity, is not identity. An extract of a plant is not the plant, and methods used to identify a plant extract are not necessarily the same as methods used to identify a plant.

For example:  “It is possible to use only a picture as an identity standard for whole fresh Ginkgo leaf from a cultivated field as it is not easily confused with the leaf shape, venation, and color of other leaves that could be present in the field. But powdered Ginkgo leaf is a different form of the ingredient and requires microscopic and/or chemical analysis. Ginkgo extracts have no morphological or anatomical features and it is possible that extracts may include a number of chemical compounds at different ratios and concentrations that would require a different chemical test to assure the identity of the ingredient.”

One of the places where this report runs into trouble is illustrated in another excerpt: “The origin or source of a botanical is important since the kind of identity tests that will be necessary to assure the identity of the plant is dependent on the number of plants that could be confused with the desired plant. As an example, a cultivated field of St. John’s Wort (Hypericum perforatum L.) that was grown from seed or plant stock that had been certified or the field inspected by a botanist competent in determining the species in the field would be all that is required to assure the identity of the unprocessed plant material. However, if the source of St. John’s Wort (H. perforatum L.) was collected from the wild where other species of Hypericum could be confused with it, then collection guidelines and identity tests would need to be established to assure that only the correct species of St. John’s Wort (H. perforatum L.) was present.”

While not factually inaccurate, the above statement is in conflict with the 100% identity rule that was not envisioned in the 1999 report, but which is a major requirement in the 2007 final rule.

“Ah ha?”  The final GMP rule said 100% identity testing for dietary ingredients (i.e., no Certificates of Analysis). The interim final rule on exemption from 100% identity testing also doesn’t comport well with the guidance provided in the FAC report concerning the use of Certificates of Analysis for identity. Those recommendations alone are probably sufficient grounds for FDA to make the report disappear. In the above example, cultivated SJW seems to be exempted from identity testing, an exemption not granted in the 2007 final rule, and one that would have to be exhaustively proven adequate to assure identity in the interim final rule.  “Ah ha!”

The statement on identity testing for extracts is as follows:  “A validated chemical assay such as AOAC, pharmacopoeias, and other publications of established and validated analytical methods are the only analytical methods relevant to identification of this form of the botanical ingredient.”

Section 111.320 (a) of the GMP mandates you verify that the laboratory examination and testing methodologies you use in your GMP operation are appropriate for their intended use. Section 111.320 (b) says you must identify and use an appropriate, scientifically valid method for each established specification for which testing or examination is required. This is reinforced in GMP Section 111.73(h)(1), which says (again) that you must ensure that the tests and examinations that you use are appropriate, scientifically valid methods.

Yet searching the literature leads you to the (correct) conclusion that there are very few scientifically valid chemical identity methods for botanicals. Mystery solved? I maintain there is some good information in the FAC report on identity, but I concede there is enough bad information to justify its withdrawal.

Perhaps the most problematic part of the report is set out in its very first sentence, which, in essence, lays out an existential paradox for the 100% identity rule—and perhaps for the industry itself. None of the language in the 2007 final rule excludes identity test methods from the “scientifically valid” standard. Nothing in the interim final rule implies that the tests performed to eliminate the requirement for 100% identity testing of dietary ingredients need not be scientifically valid and fit for purpose. But Section 402(g)(2) of the Federal Food, Drug and Cosmetic Act states that dietary supplement GMP regulations may not impose standards for which there are no current and generally available analytical methodologies.

Now, no one doubts that classical methods for identifying plants are scientifically valid and fit for purpose; those receiving crude botanicals in a form that can be identified using these techniques need not worry. However, I’m not aware of any publicly available chemical identity methods for botanicals that meet the  “scientifically valid” and  “fit for purpose” standards. The paradox is that the 2007 rule requires you to test and the tests have to meet the “valid” standard, but there probably aren’t any extract identity methods that meet that standard. The implication is that you need to use only botanical dietary ingredients in your raw material stream that can be identified by accepted methods (physical examination of actual plant material by a botanist).

But wait a minute. The U.S. Congress seems to have said in Section 402(g)(2) of the act that if there aren’t any publicly available methods available you don’t have to test. So FDA can’t do anything to you GMP-wise if you aren’t doing identity testing. Is you’re head spinning yet?­

The Riddle: What to Do?

I think FDA did the right thing in taking down the report. It had some good information but it was just too outdated. The throwaway first sentence muddied the waters even further because it forced the manufacturer to do too much soul searching. Do I rely on 402(g)(2) of the Federal Food, Drug and Cosmetic Act? Do I only use identifiable plant material? Do I suck it up and validate (or pay to have validated) my chemical identity tests?

My hope here is to evolve the discussion on dietary supplement quality. The best possible outcome would be to convene another Dietary Supplement Working Group of the Food Advisory Committee and hammer out an up-to-date report that keeps the best information from the previous report and ditches the rest. Certainly, the puzzle around the need to validate chemical identity methods, without an actual validation protocol to do so, must be addressed.

Validation is important for any method measure, as it is related to the quality of the result. But this process is less straightforward for qualitative methods. Rather than considering accuracy, precision, linearity and range as we do for quantitative methods, we need to think about false positive and negative rates, unreliability regions and cut off limits. Even common parameters like sensitivity must be considered differently. For a quantitative method this is a numerical value that relates analyte concentration to detector response. However, for a qualitative method, sensitivity would be related to the probability that the method will detect a known positive sample as positive.

The AOAC Dietary Supplement Task Group has already identified the need for a chemical identity method validation protocol. I encourage all interested in the group’s progress and/or providing input to contact Robert Rathbone (contact information available at www.aoac.org). In the interim, keep in mind that whatever method you use (TLC, LS/MS, UV-Vis, Near FTIR), the key will be to capture data from as many authenticated reference materials as possible. What are and where do we get  “authentic reference materials?” I’ll discuss in my next column… 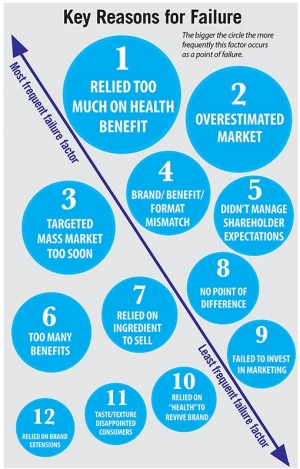 Study Explores the Causes of Failure for Functional Foods