The company tested a material claiming naturally high but not feasible levels of vitamin C from amla as a fermentation source, and found it was not naturally-derived from the amla itself. 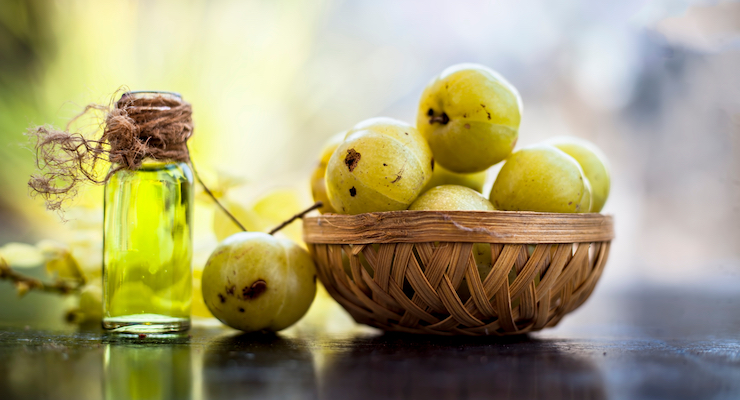 Sabinsa scientists traced the vitamin C found in allegedly misbranded products to fermentation as a source, and not amla.
06.17.20

Natural products manufacturer Sabinsa warned the industry about a mischaracterized amla extract with claims of high vitamin C for sale in the marketplace. This warning comes on the heels of their previous announcement about a product which contained synthetic curcumin masquerading as a natural source of turmeric, according to lab tests.

Vitamin C, which has skyrocketed in consumer demand as people seek out dietary supplements with immune support, only occurs in trace quantities in amla (also known as Indian Gooseberry). According to Sabinsa, a commercially-available amla extract being sold by multiple companies claimed that it was able to isolate and extract vitamin C up to 25% from raw material, which is not economically feasible. Further, the companies claimed that their material was organic.

According to the research, levels of ascorbic acid in amla is inconsistent and often in trace quantities, which is why it is neither a valid biomarker nor a source of high amounts of vitamin C, Sabinsa said.

Sabinsa emphasized this when they introduced their Saberry amla extract to the marketplace in 2009. Sabinsa scientists published research on the low occurrence of vitamin C in amla products, and were, therefore, surprised to come across an amla extract advertised to contain more than 25% vitamin C.

They conducted tests on this finished product, and IRMS measurements traced the origin of vitamin C within the product to fermentation, meaning that it was not sourced from the amla. The fermentation process for producing vitamin C uses carbohydrates as raw materials with C4-plant origin, so vitamin C from fermentation sources has a typical C13/C12 isotopic composition characteristic of C4-plants measured as 13δC in the neighborhood of -10.

Researchers isolated vitamin C from an amla extract labeled as organic with 25% vitamin C, which, according to the metrics above, traced the origin of vitamin C to be derived from fermentation, not amla.

Sabinsa founder and chairman Dr. Muhammad Majeed said that the lack of transparency surrounding this process was unethical.

“The major source of vitamin C is through fermentation,” Majeed said. “If suppliers buy fermentation-derived vitamin C and blend it with their amla extract to claim as high as 25% w/w of vitamin C, they should disclose this. This unethical practice is not easily detected by normal analytical methods for vitamin C analysis. It is also not distinguishable by C14 radiocarbon content method, either. But there are other analytical methods to expose this repugnant practice.”

“Because we have the science and expertise to unravel this unscrupulous practice, tarnishing one of India’s beloved and cherished fruits will not be tolerated,” Sabinsa president worldwide Shaheen Majeed said. “WE have identified a few companies practicing this deception, and will be filing notices to them in the weeks ahead. We hope the industry will appreciate and adopt the methodology we’ve disclosed, so no further deception occurs.”
Related Searches
Related Knowledge Center