Adults in most regions of the world have a low to very low status of omega-3 PUFAs, particularly EPA and DHA. 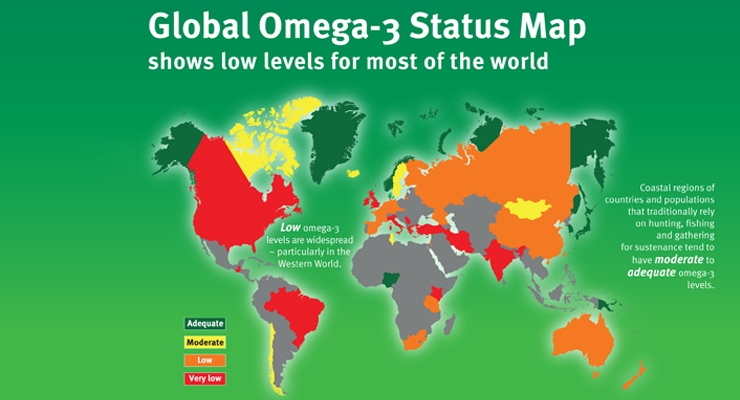 DSM Nutritional Products co-authored a new structured review, published in Progress in Lipid Research, which indicates that adults in most regions of the world have a low to very low status of omega-3 polyunsaturated fatty acids (PUFAs), particularly eicosapentaenoic acid (EPA) and docosahexaenoic acid (DHA). Low levels of PUFAs in the bloodstream are associated with a high risk of chronic diseases such as cardiovascular disease, cancer and diabetes. This global map is the first of its kind. Such a detailed global overview of PUFA status has never before been available.

The paper analyzes 298 studies to create a global map showing the levels of EPA and DHA in the bloodstreams of healthy adults across the world, identifying which regions are more at risk of chronic illness. Regions classified as having very low EPA and DHA blood levels (<4%) included North, South and Central America, Central and Southern Europe, the Middle East, Southeast Asia and Africa. The Sea of Japan, Scandinavia and regions with indigenous populations or populations who have not adopted Westernized food habits were classified as having high status of EPA and DHA (>8%).

“As stated by the World Health Organization, chronic disease is estimated to be the cause of death of approximately 38 million people worldwide every year,” commented Dr. Manfred Eggersdorfer, senior vice president, nutrition science and advocacy at DSM and Professor of Healthy Ageing at the University Medical Center Groningen. “PUFAs, and EPA and DHA in particular, have long been associated with decreased risk of cardiovascular mortality and cognitive decline. The conclusions of this paper highlight that a significant proportion of the population are at increased risk of chronic disease due to low omega-3 PUFA status.”

“In the past we have been limited by the absence of the comprehensive analysis of data that is now available to us. By developing the global map, we can better understand the current levels of omega-3 PUFAs in the blood of healthy adults worldwide. The findings can then be used when developing both national and global guidelines regarding omega-3 intake,” elaborated co-author of the study, Dr. Norman Salem, Jr., senior science fellow, Nutritional Lipids at DSM. “New recommendations will not only give the general population guidance on adequate PUFA intake, but also highlight the risks of low levels of bloodstream EPA and DHA.”