As the market continues its healthy growth, credibility among consumers will be the key to future success.

The global market for omega 3 functional foods has captured the attention of market research analysts, as well as trade and consumer media for several years now, with countless experts pondering whether or not omega 3 foods can be successful in providing the value propositions consumers want. Even though the first functional food containing the omega 3s EPA and DHA was launched 21 years ago, the market is still in its infancy, making it too early to judge its success.

Some may ask how a market can still be in its infancy 21 years after the first product launch, but omega 3s are different from most other nutraceutical ingredients being used in fortified foods. The rate of product launches continues to outpace other nutrients, the rate of positive supportive scientific publications is accelerating, consumer awareness, knowledge and usage is still growing in all major geographies of the world, and governmental and scientific bodies are releasing new intake recommendations for omega 3s every year. All of these factors indicate that the omega 3 category is still at the beginning of a growth curve-one that will have a long duration. In fact, no nutritional ingredient with underlying fundamentals on the scale of omega 3s has ever faltered.

The market for EPA/DHA omega 3 functional foods goes back to 1988 in the U.S. when Country Hen launched organic brown eggs with increased levels of these fatty acids. The company fed the hens special diets that included fish oils, sparking the beginning of a mammoth trend. Since that time nearly 2200 more foods containing EPA and DHA have been launched worldwide using fish and algal oils, various encapsulation technologies and targeting several different health conditions.

In fact, each year since 1994, the number of foods launched with added EPA and/or DHA has increased over the previous year. To date, the greatest number of products, more than 800, have been launched in Asia where powdered milks, cookies, crackers and other foods targeting young children are popular . This is in contrast to Europe and North America where ready-to-eat and ready-to-drink dairy products have been the most popular, accounting for 33% and 29% of the launches in each region respectively. (See Figure 1.)

The growth and knowledge into the biological role omega 3s play in the human body also continues to grow. In fact, as many studies have been published on EPA and DHA as have been published on Lipitor, which claims to be the most researched pharmaceutical. What is most interesting about the research on EPA and DHA, though, is that the rate at which studies are being published is actually increasing, particularly in terms of the "gold standard" randomized controlled trials. (See Figure 2.)


While new studies continue to generate "buzz" about omega 3s in the media, the primary challenge for the functional foods market is translating this science into consumer-friendly messaging. Despite the progress in research, product positionings driving the market have not changed substantially in the past 10 years. Heart health and children's health account for approximately 68% of all positioning used in EPA/DHA functional foods. Further, since the science behind omega 3s covers a multitude of health conditions, it is tempting for companies to position a product for all of the benefits. But in the foods category it is difficult to present multiple benefit messages to the consumer and retain credibility, which is why a general wellness positioning typically accounts for 20% of product launches in the category each year.

A majority of consumers in all major geographies are aware that omega 3s are healthy nutrients. In some regions, such as the U.K. and Spain, awareness is nearly universal. According to a recent study conducted by Leatherhead Food International, Surrey, U.K., more than 70% of consumers in all of the leading omega 3 markets also recognized fortified foods as sources of EPA and DHA. Media is a large driver of this awareness, with media sources being recognized as sources of information on omega 3 foods by two to six times greater frequency than physicians or healthcare providers in these markets.

But awareness and credibility are two different things. When continually positive media coverage about omega 3s persists, consumer attitudes continue to improve, thus increasing the trial rate of EPA/DHA products. Consider this statistic: most consumer research reports show that while awareness ranges from 70% to 100% in developed countries, only between 30% to 50% of aware consumers believe in their benefits.


Intake Recommendations: Catching Up with the Rest of the World

Many governments and expert scientific groups have recognized the science behind omega 3s and set their own intake recommendations for EPA and DHA. There are two general approaches followed: setting recommendations based on optimal chronic disease risk reduction and setting them based on nutrient deficiency status. It is clear that most Western populations have deficient intakes of omega 3s. Indeed some studies have demonstrated that countries with the lowest intakes of EPA and DHA have the highest rates of homicide, major depression, bipolar disorder, cardiovascular events, cardiovascular fatalities, and the list goes on. The most notable government that has not made an intake recommendation is the U.S. Even though there is a qualified health claim in the U.S. for heart disease risk reduction, there is no level of intake attached to the claim. There is a widespread belief in the industry that having a U.S. intake recommendation would significantly boost the market. One thing is for certain, it will bring significantly more credibility to EPA and DHA, in turn boosting credibility among consumers.

Recommendations based on solving inadequacies of EPA and DHA intake are typically in the 150-200 mg range, as they are trying to shore up intakes that provide minimally healthy nutrition. Intake recommendations targeting risk reduction of specific diseases in the general population tend to be in the 250-500 mg range. Lastly, some recommendations are made based on lifestyle situations, such as pregnancy or nursing, having been diagnosed with a disease and/or having abnormally high intakes of other fatty acids. These intake recommendations vary widely based on the specific situation being addressed.

Given that these underlying factors support strong long-term growth prospects for EPA and DHA foods and that consumption of these foods is still relatively low, it is worth investigating why food companies want to launch EPA and DHA products and what they need to do to be successful.

Some of the earliest products on the market have made the most gains, including well-known successes such as Puleva's omega 3 milk in Spain, Kirin's Power Water (Chikara Mizu) drink in Japan, the Parmalat omega 3 milks, or the Tip Top Up bread from George Weston in Australia. All of these products have surpassed substantial sales thresholds, with Puleva milk reaching what would be the equivalent of $680 million in retail sales in the U.S. However, there are a number of other more recent products that have also reached critical sales levels, demonstrating that omega 3 product propositions can be quite successful.

In addition to the potential success of omega 3 value propositions, the addition of EPA and DHA can also reduce the risk of new product launches. The typical product failure rate after one year in the consumer packaged goods industry is around 90%, but EPA/DHA food products have had much lower failure rates. In fact, 84% of the foods fortified with EPA and DHA that have been launched since 1988 are still on the market today. Historically, less than 5% of EPA and DHA functional foods have been discontinued within their first year on the market. Figure 3 shows that the peak failure rate comes for products that have been on the market for nine years, but even then 40% of these products are still on the market. There is no established proof why the addition of EPA and DHA omega 3s to foods reduces the market risk to food companies, but GOED believes it is related to the benefits omega 3s provide, which are sought by consumers.

In addition to the low failure rates, food companies that have launched EPA/DHA products appear to be pleased with their success. Forty-two percent of companies that have launched omega 3 products (more than 275 companies) have followed the launch of a first omega 3 product with additional launches. Importantly, these companies account for 83% of all EPA/DHA products launched to date. While some of the companies will launch the same product in multiple countries, Figure 4 shows that many of the companies in leading omega 3 markets will launch multiple products in the same market as well.

All of the fundamentals exist for continued success in omega 3 foods, including growth in product launches, new science, recognition of the science and consumer understanding. In fact, none of the rates of growth or maturation in any of these factors are showing signs of slowing down. EPA and DHA fortified foods have shown strong resilience in the market to date, and many have even reached high thresholds of success. The challenge for brand and product managers in going from launching a product with a low probability of failure to one with a high probability of success is really no different than with any other health food product: the marketers need to position the product with a benefit sought by a sizeable target audience in a format that is credible with consumers.


About the author: Adam Ismail is the executive director of the Global Organization for EPA and DHA Omega 3s (GOED), Salt Lake City, UT. He can be reached at adam@goedomega3.com. GOED is a trade association dedicated to growing and protecting the market for long-chain omega 3s by working on consumer education, and regulatory and industry quality initiatives. Currently, it is in the process of publishing a research report discussing the underlying fundamentals of the market for functional foods containing EPA and DHA, from which some of the highlights are mentioned in this article. To obtain more information, please visit www.goedomega3.com. 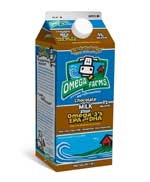