With the agency focused on product claims, experts have sounded the alarm on low-quality, potentially dangerous products on the market. 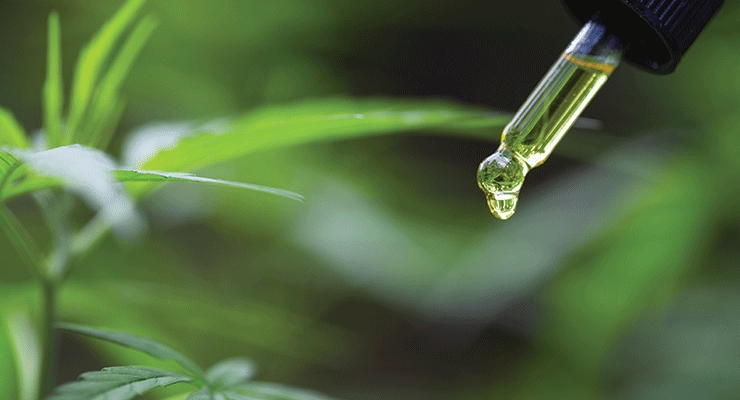 To this point, FDA generally hasn’t been inspecting or testing CBD products, but that could change.
By Sean Moloughney, Editor 03.02.20

The 2018 Farm Bill freed hemp—defined as cannabis and cannabis derivatives with no more than 0.3% THC on a dry weight basis—from the definition of marijuana in the Controlled Substances Act. Since then, the flood gates to market have swung open, as the range of food, dietary supplements, cosmetics, and animal health products containing cannabidiol (CBD) has exploded at an unprecedented rate.

FDA has said it’s not legal to sell CBD as a food or dietary supplement because of the exclusionary clause in the Dietary Supplement Health and Education Act (DSHEA), which stipulates that if a compound was first approved or investigated as a drug then it can’t be sold as a food or supplement. The agency has approved one CBD prescription drug product—Epidiolex from GW Pharmaceuticals—which is used to treat two rare and severe forms of epilepsy.

However, experts have noted that FDA has the authority to make exceptions to the rule, and could open a legal path for CBD to be used as dietary ingredient.

Instead, FDA has said it will exercise “enforcement discretion,” essentially allowing products to come to market and only cracking down on companies when they make egregious disease claims about preventing, diagnosing, mitigating, treating, or curing serious diseases, such as cancer. The agency did that recently when it issued 15 warning letters in November 2019 while also publishing a revised consumer update in which it laid out potential safety concerns.

The agency’s website stated: “FDA recognizes the potential opportunities that cannabis or cannabis-derived compounds may offer and acknowledges the significant interest in these possibilities. However, FDA is aware that some companies are marketing products containing cannabis and cannabis-derived compounds in ways that violate the Federal Food, Drug and Cosmetic Act (FD&C Act) and that may put the health and safety of consumers at risk. The agency is committed to protecting the public health while also taking steps to improve the efficiency of regulatory pathways for the lawful marketing of appropriate cannabis and cannabis-derived products.”

The agency went on to say there are “many unanswered questions about the science, safety, and quality of products containing CBD.” For example, in its review of Epidiolex, the agency identified certain safety risks, including the potential for liver injury, drug interactions, and male reproductive toxicity. FDA also said it’s actively working to learn more about cumulative exposure, and effects on certain populations like pregnant and lactating women, children, the elderly, and animals.

Across the pond in the U.K., the Food Standards Agency (FSA) has set a deadline of Mar. 31, 2021 for CBD businesses to submit valid novel food authorization applications. After that date, only brands that have submitted a valid application will be allowed to remain on the market. FSA said the authorization process ensures novel foods meet legal standards, including on safety and content.

At the same time, FSA recommended healthy adults not to take more than 70 mg of CBD per day unless under medical direction. It also urged certain populations like pregnant and breastfeeding women to avoid CBD entirely. FSA said the new precautionary advice is based on recent findings by the government’s Committee on Toxicity (COT).

Jane Wilson, American Herbal Products Association (AHPA) director of program development and liaison to the AHPA Cannabis Committee, said that AHPA reviewed 41 warning letters issued by the U.S. FDA between February 2015 and November 2019 to companies regarding their CBD products and found that the agency has in fact primarily targeted those making drug claims.

“The lesson for industry is clear: don’t make claims that CBD products can treat, cure, or prevent any disease,” said Wilson. “These warning letters have generally resulted from review of websites, social media accounts, and other online content rather than a facility inspection, so companies should be aware of whether they have any of this type of material publicly posted. This includes testimonials that consumers may make about their products.”

With respect to safety, Wilson said if FDA clarifies the regulatory pathway for these products, then safety can be addressed as it is for other dietary supplement products, using existing regulatory provisions. “This would include compliance with new dietary ingredient provisions as well as reporting any serious adverse events associated with CBD products as required for other dietary supplements, which is an important measure of post-market safety.”

Filling the Guidance Vacuum
In March 2019, the AHPA Board of Trustees adopted a formal guidance policy recommending that “any manufacturer, labeler, packer, holder, or marketer of dietary supplements or foods that contain hemp or CBD comply with the following federal regulations that apply to such operations: food facility registration; current good manufacturing (cGMP) and good agricultural practice regulations; labeling requirements, including nutrition labeling, allergen disclosure, listing of required contact information, absence of drug claims, etc.; new dietary ingredient and food additive provisions, where applicable; and also that dietary supplement operations comply with applicable obligations for timely submission to FDA of any received serious adverse event reports associated with their products.”

“While this is an AHPA guidance policy, we recommend that any company marketing CBD products consider following this guidance,” Wilson added.

Daniel Fabricant, PhD, CEO and president of the Natural Products Association (NPA) said he’s not advising companies to go to market with CBD products. However, if companies decide to take that risk, they need to have safety data on their specific product.

“Do you have safety data? Have you submitted an NDI? Are you preparing to? You’ve got to be forward-facing at some point on CBD,” said Fabricant. “If you’re looking to get in the marketplace, even in light of challenges at FDA, you have to have table stakes. You need to know your product is safe—your product, not just ‘we’ve looked at some data and we feel good about it.’ Your data shows your product is safe. Realistically, that’s what’s going to be required in the marketplace. I don’t see any deviation from that.”

He added that even though FDA generally hasn’t been inspecting and testing products, at some point that could change. “When the pendulum swings back, are you prepared? Have you done your diligence?”

Potential Pathways
AHPA first called for FDA to use its statutory authority to recognize CBD as a lawful dietary ingredient at a public meeting in March 2018, nine months before the passage of the Farm Bill, Wilson noted. “In comments to the agency during the 2019 FDA public meeting and public comment period on cannabis and cannabis products, AHPA advocated to regulate CBD under the robust framework already in place for other botanicals used as dietary supplements and foods, such as facility registration, cGMP, AERs, labeling, etc.”

AHPA continues to urge FDA to use its existing authority to promptly create a lawful pathway for marketing of hemp-derived CBD products.

Mister agreed, saying, “We think the most direct and logical pathway for FDA to follow is to use the discretion it has under the exclusionary clause in the definition of a dietary supplement, which allows them to recognize an ingredient that may have been in the pharmaceutical world first as a legitimate dietary supplement ingredient.”

Overall, Fabricant said he’s “not one for reinventing the wheel,” having served at FDA as the agency’s dietary supplement programs director. “We have natural products on the market that are also APIs (active pharmaceutical ingredients); red yeast comes to mind,” he noted. In those cases, concentration and dosage ultimately distinguish drug products from dietary supplements.

“Drugs have side effects, foods don’t; that’s the basis of our food and drug law. That’s why we have the safest food and drug supply in the world.” Once safe levels are established, the market can respond accordingly.

Safety Concerns
It is critical for FDA to act quickly to regulate these products, according to Wilson, because the current lack of clear regulatory requirements “increases potential consumer concerns about quality and safety. The current regulations for herbal supplements provide a robust framework for ensuring that these products are high-quality and safe.”

AHPA also noted that in the absence of clear federal regulatory oversight, some states have introduced their own CBD regulations. “Members of the hemp industry are also participating in self-regulatory initiatives as a means of addressing potential quality and safety concerns,” Wilson added.

Mister said he was concerned by FDA’s comments on CBD safety. “I think they are vague and potentially misleading to consumers because they’ve raised some safety concerns but are not providing the studies for which they are basing those concerns.”

The dosage is everything, he continued. “If they are relying on the studies submitted with the new drug application for Epidiolex they could be looking at very high levels of intake of CBD.”

It’s common for supplement products to provide 20-30 mg of CBD per day, Mister noted. “And that’s very different than a prescription product offering 1,000 to 1,500 mg a day. These public statements are not particularly helpful when we don’t know anything about the research they say they’re relying on.”

CRN has convened a task force of its member companies and has been working with an outside consultant to develop a risk assessment around CBD, Mister said. “We think it’s important to establish there are levels at which CBD is safe.”

Sounding the Alarm
In the absence of clear regulatory guidance, and with so many products on the market, experts are raising serious concerns about quality.

“We know there are products out there that have THC in them, or the CBD levels don’t match what’s on the label,” said Mister. “In some cases, they still have residual pesticides or high lead levels, or other kinds of contaminants—solvents used in the manufacturing that have not been removed. So it really is a buyer beware marketplace for CBD right now, unless you’re buying from a very reputable brand.”

In many cases though, those reputable brands are sitting on the sidelines, waiting for clarity from FDA.

Meanwhile, Mister said he’s more concerned about low-quality products posing a risk to consumers than any hypothetical safety risk for CBD that FDA may have suggested.

“What we have right now is a recipe for something to go wrong. You cannot put the genie back in the bottle. Would we rather continue to have this wild west marketplace we have today with no regulatory framework around it, or would we rather have a regulated ingredient that has clear requirements for how it’s made and what must be on the label?”

Fabricant noted that since 2018, FDA has only inspected four facilities purported to manufacture CBD products, and only pulled three products aside for THC testing. “Nurses and firefighters are having their employment challenged because they unwittingly took an amount of THC that would cause them to fail their drug test.”

“I’m definitely concerned by what’s on the market,” he continued. “You’ve got an environment where you don’t have an active regulator. People know FDA’s not inspecting and testing. It’s amazing nothing’s happened to this point. We know there are some manufacturers that aren’t reputable and legitimate, and they are capitalizing on the hype.”

Legitimate companies are concerned about getting into the market, he added, “and those are the companies you want in the market. You want the people who make your multivitamin at the grocery store in the market. Those firms have GMPs in place, they invest in clinical trials to show the benefits of their product. I think the American consumer is not getting that because of the inaction of FDA in a lot
of ways.”
Related Searches
Related Knowledge Center