Antioxidants in the News

A collection of recent updates related to antioxidant ingredients. 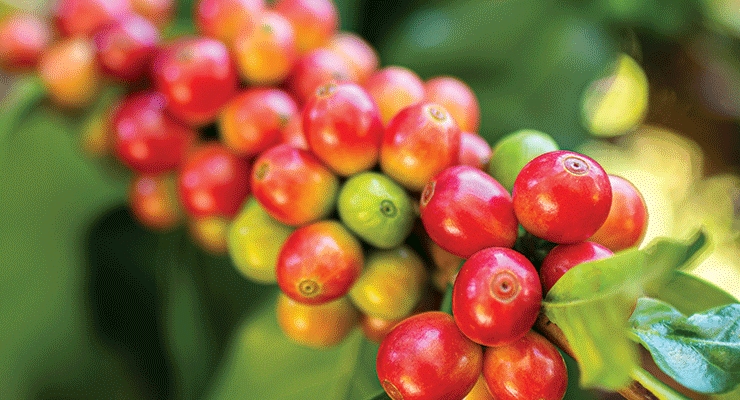 Coffee is one of the most popular beverages in the world.
By Nutraceuticals World Staff03.02.20

Coffee has become one of the most popular beverages in the world, but meeting demand has resulted in 24 million tons of waste produced from discarding the outer fruit and pulp of the coffee cherry. Through upcycling, CoffeeFruit Pure addresses this waste issue through its development of an all-natural, specialized production process, which preserves the fruit and pulp, allowing CoffeeFruit Pure to transform the coffee cherry into a potent and wholesome ingredient.

“Recent independent tests have shown that CoffeeFruit Pure contains high levels of antioxidant activity, including polyphenols and chlorogenic acid, which surpasses the capacity of other fruit-derived superfoods,” said Stuart Nixon, business development director at CoffeeFruit Pure. “The antioxidant levels of the cherry, along with the high potency of additional key nutrients within it, allow us to make an ingredient that suits most formulation applications across a wide spectrum of sought out benefits. The recent test results reveal CoffeeFruit Pure as a potent and efficacious choice for various health solutions.”

CoffeeFruit Pure uses no solvents, chemicals, or additives in the production process and aligns with consumer demand for clean labels and sustainable ingredients. CoffeeFruit Pure is available in a range of mesh sizes to suit various applications, including functional food and drink options.

Study Reveals Novel Pathway for Tocotrienol in Neuroprotection
Research published in the International Journal of Molecular Sciences detailed a novel pathway for tocotrienol-mediated neuroprotection in primary hippocampal neurons. The collaborative study was conducted by a group of researchers from Yale University and the University of Alabama.

This new study builds on the foundation of non-antioxidant pathway elucidated by Chandan Sen (Indiana University) in the previous two decades, namely five molecular checkpoints. This new research paper detailed that tocotrienol exerts its neuroprotective effect via a novel pathway that involves both antioxidant and non-antioxidant functions.

Mitochondrial reactive oxygen species (ROS) are produced in hippocampal neurons during excitotoxic conditions such as after glutamate toxicity. Glutamate toxicity typically occurs during injuries such as stroke or trauma to the head. The resulting ROS production subsequently activates caspase 3, a protein responsible for induction of apoptosis. In a normal condition, a protein called B-cell lymphoma extra-large (Bcl-xL) supports neurite outgrowth and neurotransmission. However, in excitotoxic situation, caspase 3 would convert Bcl-xL to a fragmented form known as ΔN-Bcl-xL. As opposed to the anti-apoptotic function of Bcl-xL, accumulation of mitochondrial ΔN-Bcl-xL would cause mitochondrial dysfunction and neuronal death. Hence, it is important to have a therapeutic agent that could inhibit or slow down the production of pro-apoptotic ΔN-Bcl-xL.

Alpha-tocotrienol is able to scavenge ROS, thus indirectly reducing the formation of ΔN-Bcl-xL in neurons via its strong antioxidant activity.

Interestingly, this study also reported another novel pathway—that alpha-tocotrienol plays an important role in blocking the binding of ΔN-Bcl-xL and Bax through competitive inhibition. Naturally, the binding of ΔN-Bcl-xL with Bax will eventually lead to neuronal mitochondrial apoptosis. However, in the presence of alpha-tocotrienol, it competitively binds with ΔN-Bcl-xL and consequentially prevents mitochondrial death.

The researchers concluded that tocotrienol may be a novel nutritional strategy to prevent ROS-mediated ΔN-Bcl-xL formation in neuronal mitochondria and therefore, may be able to protect neuronal cell death.

“In year 2000, d-alpha-tocotrienol was first reported to be 1,000 times more potent than d-alpha-tocopherol in protecting neuronal cell death upon glutamate toxicity,” said Bryan See, business development manager of ExcelVite. “Over the past 20 years, meticulous brain health research on EVNol and EVNol SupraBio full spectrum palm tocotrienol complex as well as a series of U.S.-NIH funded studies discovered that EVNol and EVNol SupraBio exert neuroprotection via five key cytosolic targets (non-antioxidant pathways) that are involved in regulating neuronal cell death or survival. This new study shows that tocotrienol could act via the antioxidant pathway and competitive inhibition as well in protecting neurons especially hippocampal neurons against excitotoxicity. Taken together, these studies show that tocotrienol could exert neuroprotection effects via both antioxidant and non-antioxidant pathways.”

“Another exciting bit of information from this study is that it was carried out with hippocampal neurons,” he continued. “Hippocampus is the region in the brain that is responsible for learning and memory.

Hippocampal dysfunction has been associated with pathogenesis of neurodegenerative diseases and age-related cognitive impairment. This new study and all the related neuroprotective studies over the past 20 years provide strong evidence that tocotrienols are neuroprotective via both antioxidant and non-antioxidant pathways, especially for cognitive and brain health. I am extremely excited as it underscores EVNol SupraBio or EVNol as a potential well-rounded and natural therapeutic agent for brain protection and cognitive health.”

Sessions were divided into multiple categories: Biochemistry and Pharmacology, Nutritional and Medicinal Values, Biodiversity and Ethnomycology, and Cultivation.

Jeff Chilton, founder of Nammex, elaborated on his previous presentation at the International Society of Mushroom Science conference in Amsterdam in 2016. Beta-glucan testing remains the Nammex primary standard, accompanied by ergosterol and ergothioneine. Using these three markers plus alpha-glucans (starch), Chilton created a fingerprint that can be utilized for quality control of commercial mushroom products.

Ergothioneine, an important antioxidant primarily found in fungi, is now being tested and quantified in all Nammex extracts, a milestone in this category.

Chilton also presented research by Dr. Barry McCleary, founder of Megazyme, who was unable to attend. McCleary’s paper detailed the Megazyme beta-glucan testing method and its advantage for mushroom testing. Using this method, not only beta-glucans but also alpha-glucans (starches) can be determined. This means that various starch adulterants can be unmasked, an ongoing issue for mushroom products.

S.T. Chang, professor emeritus, a founding member of the organization, and “godfather” of medicinal mushrooms, was in attendance and taught a one day seminar. Chang has been committed to the development and promotion of edible and medicinal mushrooms for over 60 years. In 2015, in a keynote presentation to the first Chinese Reishi Conference, Chang quoted information and charts from Chilton’s white paper, “Redefining Medicinal Mushrooms.”

Pharmactive Debuts Aged Black Garlic Extract
Madrid-based Pharmactive Biotech Products S.L. has developed a new generation of aged black garlic extract for functional food applications and the culinary market, launched under the brand ABG10+. The extract is obtained from fresh garlic (Allium Sativum L.) that has been aged, a process which alters the physiochemical properties of garlic resulting in enhanced antioxidant and cardioprotective properties.

The company said ABG10+ is derived from garlic and is the first extract standardized to a higher concentration of the bioactive compound S-allyl cysteine (SAC) than in standard black garlic. SAC is a water-soluble bioactive compound acclaimed for its high antioxidant capacity and its cardiovascular benefits, as supported by multiple clinical trials.

Black garlic is a culinary delicacy that has been enjoyed for centuries, particularly in India and other Asian countries such as Thailand, South Korea, and Japan. It is traditionally produced by aging whole bulbs of fresh garlic at high humidity and temperatures, a process that creates a deep black hue as well as a soft, jelly-like texture, and sweet syrupy flavor. The aging process also decreases the pH from approximately 6.0 in raw garlic to less than 3.8 in aged black garlic, naturally bestowing a longer shelf life. In the West, aged black garlic has been trending as a compelling functional food used by professional chefs to flavor a range of savory dishes.

Pharmactive’s formulation ABG10+ is produced via a proprietary aging process through a naturally occurring chemical reaction called “autocatalysis” under rigorous temperature and humidity controls. This technique naturally enriches the garlic with its unique composition of SAC, polyphenols, and melanoidins, macromolecules responsible for the dark color. All three compounds exert potent antioxidant effects, according to the company. In a recent pilot study ABG10+ demonstrated superior antioxidant capacity in comparison to other aged garlic extracts currently on the market, the company said.

“The efficacy of our black garlic extract is backed by science and is a highly stable and bioavailable biomolecule that works to reduce oxidative damage through its superior antioxidant and cardioprotective properties,” said Alberto Espinel, head of R&D for Pharmactive. “The aging process reduces the allicin content and removes the pungent flavor associated with fresh garlic which tends to repel many consumers. The allicin is converted into a potent antioxidant complex and other bioactives characteristic of black garlic, plus it boosts overall nutrient composition while increasing and releasing complex flavor notes. This makes it an excellent candidate for functional foods.”

“ABG10+ has the potential to meet growing consumer demand for healthful flavors in terms of its organoleptic versatility,” said Julia Diaz, head of marketing of Pharmactive. “It offers food companies a unique opportunity to include in their products functional flavor and added value.”

Innova Market Insights reported that one in 10 U.S. consumers have increased their consumption of products containing active ingredients in the past year in order to “be healthier.” Meanwhile, food formulators are increasingly placing the spotlight on scientific claims for ingredients that deliver functionality to appeal to the growing health-conscious consumer market.

Currently, the aged black garlic extract ingredient has been successfully adapted into finished products and functional foods. It can be integrated into dry preparations, such as snack bars, endowing a natural sweetness, or incorporated into condiments.

Aged black garlic extract also is suitable for dietary supplements. The ingredient contains no additives or preservatives and does not undergo any form of burning, caramelization, or high-heat treatment, the company noted. ABG10+ is kosher and halal certified and is available in organic form as well.

Pharmactive sources its garlic bulbs from a Spanish grower and assumes full supply chain control on field and throughout manufacturing. The company deploys microbiological and contaminant screening, including detection of noxious aflatoxins, pesticides, and heavy metals (as are found in some Chinese sources of garlic) and is continuously audited by regulatory agencies required to maintain its quality assurance ISO certifications.
Related Searches
Related Knowledge Center