New product development increased 202% globally over the past five years.

Superfoods are frequently marketed as the answer to consumers’ health woes and now new research from Mintel highlighted the popularity of these nutrient packed foods. Mintel Global New Products Database (GNPD) revealed that between 2011 and 2015 there was a phenomenal 202% increase globally in the number of new food and drink products launched containing the terms “superfood,” “superfruit” or “supergrain.”

And it seems there is no end to the popularity of these so called wonder foods, as in 2015 alone there was a 36% rise in the number of food and drink products launched globally featuring the terms “superfood,” “superfruit” or “supergrain.” In 2015, the U.S. played host to the most superfood and superdrink launches (30%), followed by Australia (10%), Germany (7%), the UK (6%) and Canada (6%).

The surge in launch activity came as a result of strong consumer demand for highly nutritious products. Today, over seven in 10 consumers in France (72%), Germany (71%), Italy (73%) and Spain (72%) agree that health-promoting benefits of natural foods, for instance fruit and vegetables, are preferable to the added benefits of functional foods.

What’s more, Mintel research reveals that the superfood sensation has spread beyond food and drink. Indeed, while 43% of products launched globally 2011-2015 with the words “superfood,” “superfruit” or “supergrain” in the product description were in the food category and 11% fell under the drink category, as many as three in 10 (30%) were found in beauty and personal care, while 12% were in the health and hygiene category and 4% were in the pet category.

Stephanie Mattucci, Global Food Science Analyst at Mintel, said: “The popularity of ‘super’ products is clear as food and drink manufacturers globally are tapping into a demand for these nutritionally dense ingredients. But superfoods are not only limited to food and drink as they are regularly appearing in the beauty, health and hygiene and pet food aisles as a result of today’s consumers becoming much more aware of what they are putting into and onto their bodies.”

“Desire for healthier, less refined alternatives to wheat has fueled the rediscovery of ancient grains. Flavorful and nutrient-dense ancient grains have begun to change the negative perception of some carbohydrates by leveraging their nutritional profile and rich heritage. Ancient grains offer an alternative to wheat but also come bundled with functional and nutritional components, and provide new flavors and textures. They are a great way for free-from products to talk about health,” continued Ms. Mattucci.

Alongside the hype in launch activity, there is also strong consumer interest in ancient grains as 30% of UK pasta consumers said that pasta made with ancient grains, for instance quinoa, is healthier than regular pasta. What’s more, usage of these heritage grains is high, as two in five (41%) US consumers have eaten ancient grain-based cereals.

“While the number of products containing ancient grains has been rising, next we could see the popularity of sprouting ancient grains. The ancient, accidental process of sprouting, where whole grains are soaked and left to germinate, has largely been eliminated by modern processing techniques. There has been a return to this ancient practice, with controlled sprouting practices being introduced, as the nutritive advantage of sprouted grains is being recognized. The ancient grain quinoa is leading the comeback of sprouted grains,” added Ms. Mattucci.

“Pulses can be used to add a range of natural health benefits to food and drink products. Additionally, healthy pulses are staples in many ethnic cuisines, offering manufacturers a pathway for product innovation for convenience-seeking ethnic food explorers,” Ms. Mattucci continued.

“Some seeds, including chia and pumpkin seeds, offer complete protein, with all nine essential amino acids in the correct ratios. However, a lot of protein from seeds is incomplete. Blending seeds can help improve the quality of protein,” noted Ms. Mattucci.

Going forward, it seems that turmeric, known for its anti-inflammatory benefits and moringa, said to have beauty and anti-aging properties, could be the superfoods to watch.

“Turmeric has potential as an ingredient in supplements and functional food and drink products, particularly within products aimed at the growing senior population. Additionally, moringa could be used in anti-aging beauty food products. While currently the ingredient is used in many beauty launches, the leaves are nutritional powerhouses,” concluded Ms. Mattucci.
Related Searches
Related Knowledge Center
Suggested For You 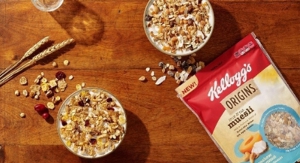