The start of a new year offers a predictable platform for many people to develop resolutions and pledge commitments while also leaving the past, and previous failures, filed away far from sight. Considering how the economy has crushed so many consumers and companies—and industries—over the past few years, who can blame them for wanting a fresh start?

However, too often, people look to push forward in new directions without a legitimate plan of action, or without fully understanding why and where they’ve failed in the past. It’s nice to want to join a gym and lose a few pounds, but it doesn’t mean much unless you actually exercise regularly and maintain a healthy lifestyle.

Despite growing popularity and confidence from consumers, the nutraceuticals industry will face several challenges from a variety of fronts as it continues to progress and mature. Chances are, it won’t be business as usual.

First of all, FDA and FTC are renewing their own commitments in 2012 to enforce existing laws governing the dietary supplement industry, while ensuring consumer safety. And rightly so, as criminal fly-by-night companies are finding new ways to gain an edge—lacing dietary supplements with active pharmaceutical ingredients and making bogus health claims on product—creating an illegitimate and unfair marketplace.

Undoubtedly, FDA’s New Dietary Ingredient notification guidance will be of paramount focus for all industry players. FDA will also be increasing inspections of your facilities this year in an effort to enforce Good Manufacturing Practices (GMPs). Labeling claims and Serious Adverse Event Reporting are also priorities for the agency.

As more raw materials come in from China, and the supply chain grows even more complex, the nutraceuticals industry will be challenged to validate and prove its products are of high quality more than ever before.

With so many pressures bearing down on smaller companies from opposing directions, will we see more mergers and acquisitions in 2012? Who will be taken out with the tide? And what are the implications for your business?

Sure, it’s a good idea to set goals, just stay accountable—to your customers, to your company, and to yourself.

Sean Moloughney has been the associate editor of Nutraceuticals World since 2008. He can be reached at smoloughney@rodpub.com.
Related Searches
Related Knowledge Center
Suggested For You 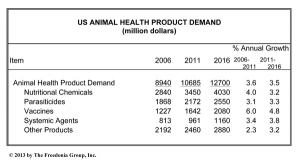 All Signs Point to Growth