On January 17, 2014, Robyn Frisch, founder and CEO of Rochem International, hosted a celebration in honor of the company’s 20th anniversary. The event was held at the Crest Hollow Country Club in New York, among many of Rochem’s esteemed customers, suppliers, colleagues and friends.

Mrs. Frisch stated, “We are not only celebrating Rochem’s 20-year milestone, but also the strong bridge we have built between top manufacturers in China and global customers in pharmaceutical, nutritional, confectionary and food industries."

Rochem’s success has led to an expansion of its staff, and the relocation of its headquarters from Ronkonkoma, NY, to a new 60,000 sq. foot facility in Hauppauge, NY. The company plans to occupy the new facilities by mid-year 2014. According to Rochem, the purchase of the new building is a step toward future growth and investments in the industry.

Matt Thiel, president of Rochem International, commented “Rochem’s next twenty years look even more promising than the excellent results we’ve produced as an organization in our first 20 years.”
Related Searches
Related Knowledge Center
Suggested For You 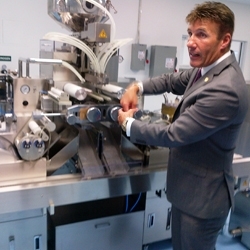