HMOs boost the immune system and protect against infections. 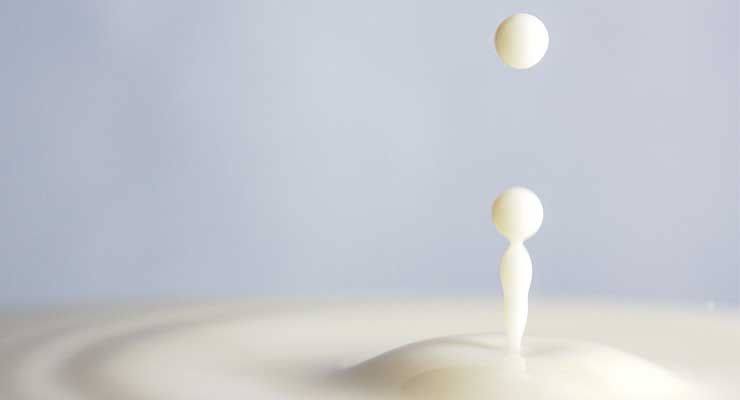 Our immune system helps us to avoid or overcome viral and bacterial infections. It features many interacting cells and molecules that ensure the body can recognize and fight intruders while distinguishing them from its own cells.

The basis of a healthy immune system starts early in life and is influenced by genetics, the environment, and nutrition. Breast milk contains all the nutrients required for the growth and development of newborns, as well as components that help to establish a healthy immune system and a balanced microbiome to protect against disease. This is why breastfeeding is considered the “gold standard” of infant nutrition. Many of the components of breast milk that support the immune system and inhibit pathogens are complex sugar molecules known as human milk oligosaccharides (HMOs).

Sugars with Diverse Structures & Functions
The rich repertoire of HMOs has evolved over millions of years. Synthesized in the mammary gland, they are based on lactose, a disaccharide of glucose and galactose units, to which one or more monosaccharides are linked in a variety of combinations. HMOs contain one or more of the five principal building blocks: glucose, galactose, N-acetylglucosamine, fucose, and sialic acid.

More than 200 different HMO molecules have been identified, and every mother has a unique set of HMOs in her milk, depending on genetics and environmental factors. For example, the most abundant oligosaccharide in human milk is usually 2’-fucosyllactose (2’-FL) but it is produced by only 80% of mothers (those with the “secretor” blood type).

Early Life Sets the Stage for a Healthy Immune System
A balanced community of microorganisms in the gut (the gut microbiome) is now recognized as a major contributor to good health. In contrast, dysbiosis of the gut microbiome is associated with several diseases, including obesity, diabetes, inflammatory bowel disease, asthma, allergies, cancer, and even neurological and behavioral disorders.1

Breastfeeding is the most significant factor associated with microbiome composition in early life, promoting the accumulation of beneficial bacteria from the genus Bifidobacterium, as highlighted in a recent study published in Nature.2 The study found the first year of life is a key phase of microbiome development, with breastmilk being the main factor that influences microbiome composition during this time. The study characterized the microbiome of 903 children 3 to 46 months of age by sequencing the 16S rRNA gene, which is a rapid way to determine the diversity and quantity of different bacterial species.

The immune system also develops during this neonatal phase, coincident with bacterial colonization of the intestine and the maturation of the gut epithelium and its mucosal layer.3 This early priming has been described as a window of opportunity to emphasize the exclusive and non-redundant functions of the early postnatal and infant period for the establishment of lifelong homeostasis.4 The disruption of this critical phase may increase the risk of various autoimmune and inflammatory diseases later in life.

HMOs as Prebiotics
One of the important functions of HMOs is to provide nutrients for beneficial bacteria during the establishment of the microbiome and the development of the immune system. These complex sugars are not digested by the infant and therefore reach the colon intact. Here, they are fermented by intestinal bacteria such as those of the genera Bifidobacterium and Bacteroides, which produce enzymes for the utilization of HMOs. In this way, HMOs act as prebiotics to promote the growth of beneficial bacteria, outcompeting harmful bacteria and helping to shape the infant’s microbiome. Interactions between the microbiome, gastrointestinal tract and immune system early in life are needed to train the immune system so that it can tolerate food, recognize and ignore beneficial microbes, and respond appropriately to pathogens.4-5

When infants are not breastfed, and receive infant formula without HMOs instead, the emerging microbiome is different, with fewer Bifidobacteria than found in breastfed children.6 This can increase the risk of infections, leading to higher rates of diarrhea during infancy but also a greater prevalence of immunity-related and inflammatory diseases later in life.1

Protection Against Microbial Infections
In addition to their prebiotic effects, HMOs also confer direct protection against pathogens by acting as decoys.3 Bacteria and viruses cannot cause infections without first binding to their target cells, and this usually requires a protein on the pathogen to interact with a glycoprotein projecting from the surface of the host cell, such as an epithelial cell lining the gut. Some HMOs can act as soluble decoy receptors by mimicking these glycoprotein landing sites, thus coating harmful bacteria, viruses, and toxins and carrying them through the gut before they can interact with any cells.

For example, fucosylated HMOs (including 2’-FL) can bind to Campylobacter jejuni, one of the most common causes of bacterial diarrhea in humans. This stops the bacterium binding to its actual receptor on the gut epithelium. A cohort study found that the incidence of Campylobacter diarrhea in breastfed infants was inversely associated with the amount of 2’-FL in the mother’s breastmilk.7

Similarly, HMOs also protect infants against noroviruses, the most common cause of acute viral gastroenteritis in the world. The virus infects people of all ages, is easily transmitted, and leads to diarrhea, vomiting, and stomach cramps. Norovirus binds to histo-blood group antigens (HBGAs) on epithelial cells. Fucosylated HMOs, which resemble HBGA structures, bind to noroviruses and coat them in a sugar layer that blocks their ability to make contact with cells.8 Both 2’-FL and 3-FL can block norovirus binding to HBGA samples in vitro, so further research could facilitate the development of fucosylated HMOs as an antiviral therapy to fight norovirus infections in the future.9

Other in vitro studies found that different HMOs inhibited the adhesion of enteropathogenic Escherichia coli (EPEC), Haemophilus influenzae, Streptococcus pneumoniae, and Salmonella fyris to epithelial cells, and 2’-FL and 3-FL inhibited the adhesion of Pseudomonas aeruginosa, a major cause of pneumonia, to respiratory epithelial cells. Some HMOs also neutralize bacterial toxins, such as the diarrhea-causing enterotoxins produced by Clostridium difficile.10 Given the diverse HMO structures in human milk, many different anti-infective properties are likely to await discovery.

HMOs as Dietary Supplements
Breastfeeding is the gold standard of infant nutrition, but some mothers cannot produce sufficient quantities of milk and others elect not to breastfeed. These mothers rely on infant formula, which generally provides the essential nutrients for their baby’s growth and development but lacks the important health benefits of HMOs. However, some HMOs are now produced on a large scale using biotechnology, and this has paved the way to include them as infant formula supplements.

One of the first companies to use bacterial fermentation for the production of HMOs was Jennewein Biotechnologie GmbH. Jennewein initially focused on the production of 2’-FL because it is the most abundant HMO produced by most mothers and has many benefits, as discussed above. Jennewein 2’-FL was approved as a dietary ingredient by the FDA in 2015, and as a Novel Food in Europe in 2017. Today, several infant formulae on the market contain Jennewein 2’-FL. “This is a first step to bring the health benefits of HMOs to children who are not, or not exclusively, breastfed,” said Katja Parschat, deputy head of research and development at Jennewein Biotechnologie GmbH.

The company’s aim is to supplement infant food with additional HMOs, thus achieving even more benefits. “We have now produced the five most common HMOs,” Parschat explained, “and we have developed a mixture with all five in the ratio representing their average natural concentrations.”

The new 5-HMO Mix contains 2’-FL, 3-FL, lacto-N-tetraose, 3’-sialyllactose, and 6’-sialyllactose. “It represents compounds of the entire spectrum of neutral, neutral-fucosylated and sialylated HMOs, and adding several different HMOs may be more beneficial than just one, not only because their positive effects are combined but also because they may have synergistic effects,” Parschat said. The tolerability of the mixture is currently being tested in a growth and tolerance study involving 324 babies. Researchers will also investigate its effects on the infant microbiome.

Another clinical study has already shown that infants fed with formula containing 2’-FL and lacto-N-neotetraose had significantly fewer parental reports of bronchitis, a lower incidence of lower respiratory tract infections, less use of antipyretics and antibiotics, and protective effects that continued well beyond the 6-month intervention period.11

Potential for New Therapies
The immense potential of HMOs for human health has encouraged significant advances in research and development recently, with several companies now producing HMOs as dietary/food supplements for infant nutrition. In the future, the positive effects of HMOs could be extended beyond infant nutrition products in order to help adults rebalance their microbiome and regain their health.

“We think there are opportunities for people of all ages,” said Prof. Lars Bode, director of the Mother-Milk-Infant Center of Research Excellence (MOMI) at University of California San Diego (UCSD), who is developing novel therapies from milk components. According to Bode, the potential antiviral effects of HMOs have come into sharp focus during the COVID-19 pandemic, and he has teamed up with virology experts from UCSD to develop new antivirals from human milk that might help to prevent or treat this disease.12

To address the effects of lifelong diseases mediated by the immune system, inflammation or chronic metabolic disorders, researchers are seeking ways to support and maintain a healthy microbiome. Given the importance of early-life events, promoting breastfeeding as the best choice for infants and, where this is not possible, using HMOs as infant formula supplements, may be a promising way to achieve this goal. Research to unravel the diversity and full potential of HMOs is therefore likely to reveal many new insights and products in the future.

About the Author: Ellen Kilger is a German science journalist specializing in biomedicine and life sciences. She is particularly interested in research on age-related diseases and the influence of genetics, nutrition, microbiome, and the immune system on disease development.