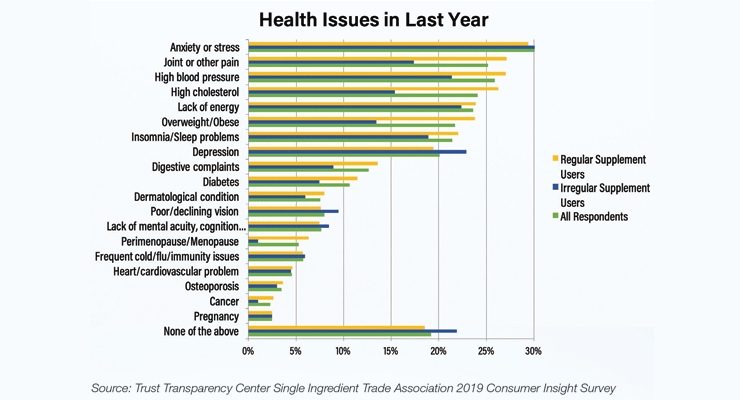 Anxiety and stress are key concerns for all consumers. 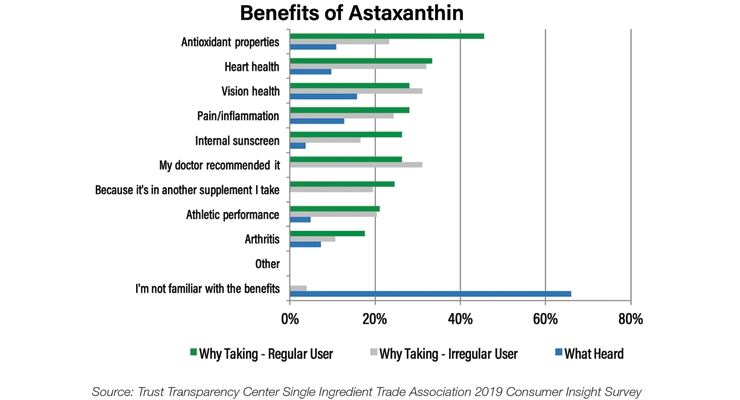 Astaxanthin is a potent carotenoid shown to cross the blood-retinol barrier. 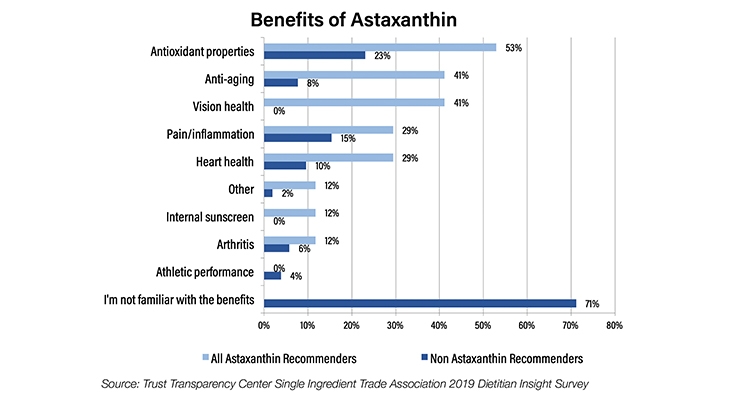 Dietitians familiar with astaxanthin recognize a range of health benefits. 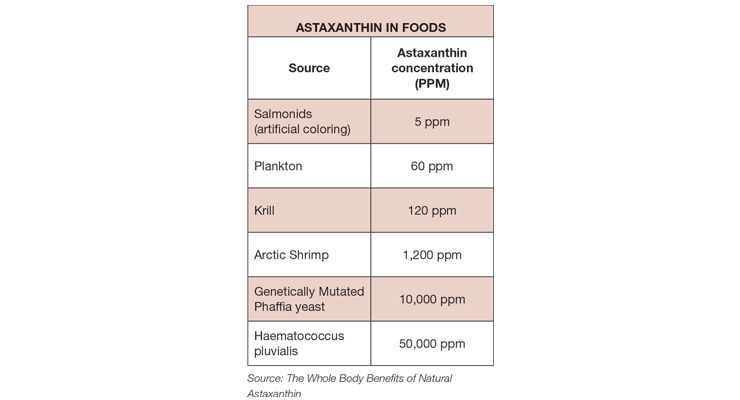 Natural astaxanthin is found in animals and plants worldwide, but only in trace amounts. 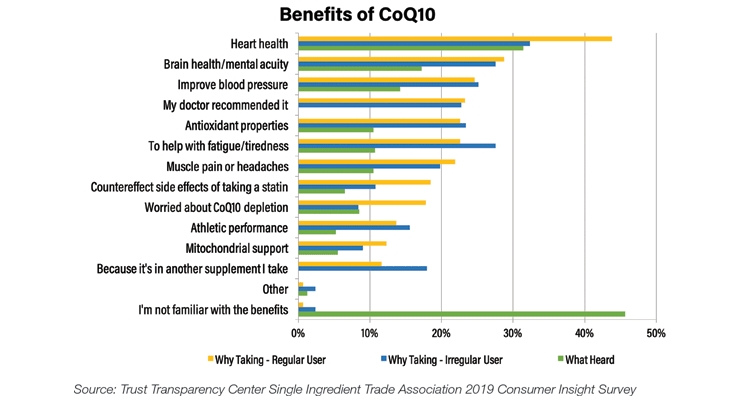 Consumers are most likely to connect CoQ10 with heart health. 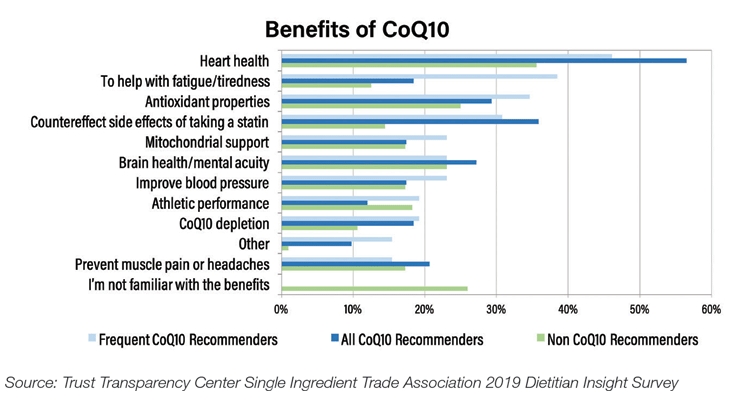 CoQ10 has been the third most popular supplement in the North American market for three years running. 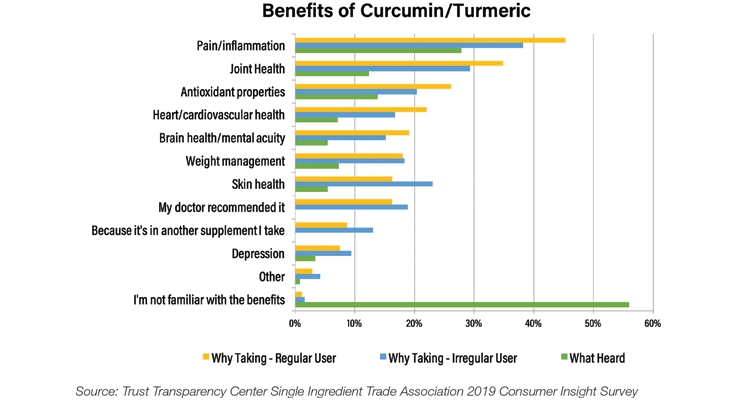 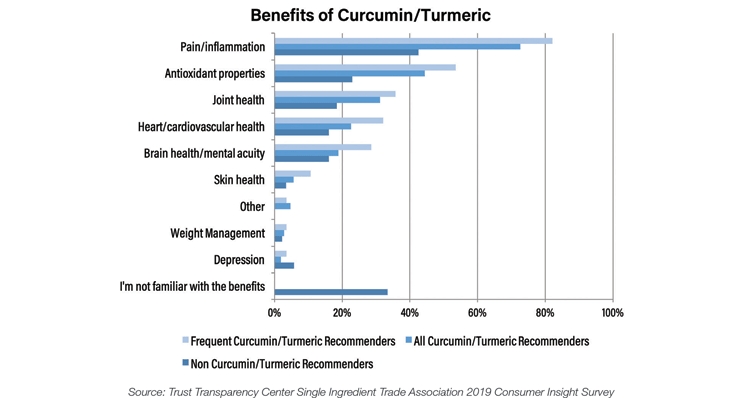 Pain and inflammation are often linked to curcumin/turmeric.

In the 1970s, renowned chemist Linus Pauling touted high doses of vitamin C and the power of antioxidants. And, in 1992, Pauling’s ideas were featured on the cover of Time Magazine under the headline: “The Real Power of Vitamins.” In 1994, right around the time of the Dietary Supplement Health and Education Act (DSHEA), Kenneth Cooper, MD, released his book Antioxidant Revolution in which he said he takes an antioxidant cocktail of vitamin C, vitamin E, and beta-carotene every day, helping push antioxidants into the spotlight.

Over the years, antioxidant supplement popularity has risen and fallen in regular cycles, largely dependent on the press of the day. When it comes to the traditional antioxidants (vitamins A, C, E, and beta-carotene) the general consensus from experts has been to obtain these nutrients from food.

Antioxidant Supplement Usage
Based on a 2009 analysis of National Health and Nutrition Examination Survey (NHANES) data, adults in the U.S. obtained 54% of vitamin C, 64% of vitamin E, and 11% of their selenium intake from supplements. And, based on Nielsen data, antioxidant sales were up 9.3% in 2018 over 2017.

This may result from, in part, health concerns that can be addressed with increased antioxidant intake. Late last year, Trust Transparency Center conducted a survey of 1,000 supplement users, and many of their concerns like joint or other pain, eye health, heart health, etc. have been shown to benefit from antioxidant intake.

What’s interesting here is that antioxidants used to be hyped surrounding ORAC and superfoods, but they keep coming back to straight antioxidant benefits which have stayed the course. While most health experts recommend food first, there are some antioxidants that truly require supplement formats like astaxanthin, CoQ10, and curcumin.

Astaxanthin
Coined by some in the industry as the king of the carotenoids, astaxanthin is a potent antioxidant with a large body of research surrounding multiple health benefits, including brain health, eye health, cardiovascular support, and muscle, joint, and tendon maintenance.

Natural astaxanthin is found in animals and plants worldwide, but only in trace amounts, so a supplement delivery form is an excellent vehicle.

Trust Transparency Center has also asked both consumers and dietitians about astaxanthin benefits. Their responses were pretty similar related to antioxidant properties and vision health. Astaxanthin is one of the few carotenoids to cross the blood-retinol barrier and awareness is strong and increasing in that area among supplement users.

While astaxanthin has low overall market penetration, in 2019, 17% of supplement users noted they use astaxanthin, as compared to 10% in 2018.

Other carotenoids also stand out in the antioxidant category including lutein and zeaxanthin primarily in the area of eye health. This is mostly the result of research from the Age-Related Eye Disease Study 2 (AREDS2), which found “10 mg of lutein and 2 mg of zeaxanthin caused a significant reduction in the progression to advanced age-related macular degeneration.”  There’s opportunity for astaxanthin and other carotenoids to be used in eye health products.

Coenzyme Q10 (CoQ10)
CoQ10 has been the third most popular supplement in the North American market for three years running, just behind vitamin D and fish oil, according to a comprehensive study from ConsumerLab.com, surveying more than 11,000 dietary supplement users. In research fielded last year, consumers and dietitians both ranked antioxidant benefits of CoQ10 third, which validates the category significantly. In the past, many in the industry thought CoQ10 was only known for heart health.

Curcumin
For curcumin, pain/inflammation was ranked number one in Trust Transparency Center’s survey, a health concern which fits within the primary antioxidant benefit area. Our data show that antioxidant properties are also strongly associated with curcumin/turmeric.

The Bottom Line
There is still a place for antioxidants in the market. Despite the ups and downs of negative news and false promise of things like ORAC or superfruits, antioxidants continue to be validated and associated with significant health benefits.