The population-based data shows that increasing the daily intake of these foods can lead to staggering reductions in type 2 diabetes risk. 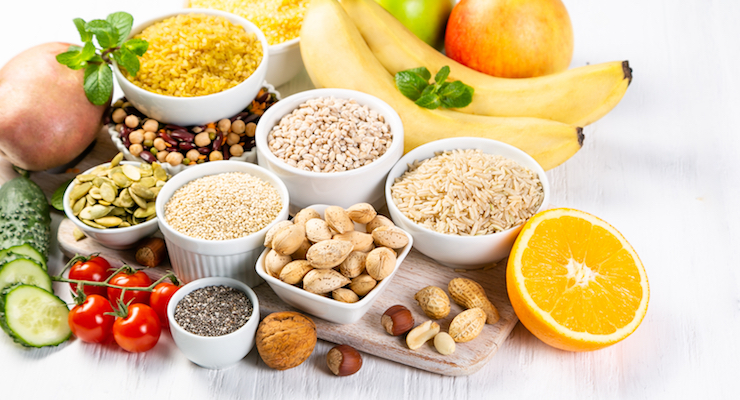 Taken together, these two long-standing recommendations can reduce diabetes risk by staggering margins.
07.21.20

The findings of two large-scale, population-based observational studies recently published in the British Medical Journal have determined that higher fruit, vegetable, and whole grain intakes are positively correlated with a lower risk of developing type 2 diabetes.

The findings suggest that, among all three of these major food groups, even a modest increase in consumption as part of a healthy diet could prevent the development of type 2 diabetes.

In the first study, a team of European researchers examined the association between blood levels of two nutrients that are indicative of vegetable and fruit intake, vitamin C and carotenoids (pigments found in fruits and vegetables), and the risk fo developing type 2 diabetes, through a large-scale survey.

In total, 9,754 adults with new-onset type 2 diabetes and 13,662 adults who remain free of diabetes during a follow up from a prior study, the European Prospective Investigation into Cancer and Nutrition (EPIC-InterAct). After adjusting for lifestyle, social, and dietary risk factors for diabetes, higher blood levels of vitamin C and carotenoids and their sum when combined into a composite biomarker score were associated with a lower risk of developing type 2 diabetes.

The second study in discussion was conducted by a team of researchers in the U.S., who examined associations between total and individual whole grain food intake and type 2 diabetes.

After adjusting for lifestyle and dietary risk factors for diabetes, participants in the highest category for total whole grain consumption had a type 2 diabetes risk reduction of 29% compared to those in the lowest category.

Consuming one or more servings of whole grain cold breakfast cereal or dark bread per day was associated with reductions of type 2 diabetes risk of 19% and 21% respectively, compared with consuming less than one serving per month.

Other whole grains with lower average intake levels were calculated by researchers for their potential to reduce diabetes risk, as well. When consumed twice or more per week, risk reductions for oatmeal were 21%, there was a 15% lower risk for added bran, and a 12% lower risk for brown rice and wheat germ. The reductions in risk seemed to plateau at around two daily servings for whole grain, and around half a serving daily for cold breakfast cereal and dark bread.

Because both studies were observational, no cause was established, so there may be confounding factors at play for each. However, both studies took into account several well-known lifestyle risk factors and markers of dietary quality in their calculations of diabetes risk.

As such, the authors of both studies say that their findings provide further support for current recommendations to increase fruit, vegetable, and whole grain consumption as part of a healthy diet to prevent the onset of type-2 diabetes.
Related Searches
Related Knowledge Center