The FTC’s complaint against i-Health and Martek, announced in June 2014, charges that the two companies, which sold the supplement at major retail stores, including CVS Pharmacy, Walmart, Walgreens, and Rite Aid, as well as online through drugstore.com and Amazon.com falsely claimed that they had clinical proof that BrainStrong Adult improves adult memory.

The final order bars the companies from claiming that any dietary supplement, food, drug, or product promoted to prevent cognitive decline or improve memory or containing DHA can prevent cognitive decline or improve memory in adults, unless the claim is truthful and supported by clinical testing. It also bars the companies from making claims about the health benefits, performance, safety, or effectiveness of such products, unless the claims are supported by competent and reliable scientific evidence. Finally, the companies cannot claim they have clinical proof when they do not.

The Commission vote approving the administrative final order and responses to members of the public who submitted comments was 3-1-1, with Commissioner Maureen K. Ohlhausen voting no, and Commissioner Terrell McSweeny not participating. (FTC File No. 132-3067; the staff contact is Keith Fentonmiller, Bureau of Consumer Protection, 202-326-2775)
Related Searches
Related Knowledge Center
Suggested For You 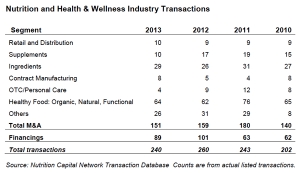 DSM’s Acquisition Strategy in the Spotlight

Wholesome Goodness at the Drugstore