Problems over health claims have led companies to divert attention away from digestive health in many instances, often toward nutrient content.

Less than 3% of global food and drink launches in the 12 months to the end of September were marketed on a high-protein or source-of-protein positioning, according to Innova Market Insights. Looking at recent new product activity in yogurt, however, data indicates that more than 10% of launches globally used protein claims, although this was skewed by the U.S., where over one-third of introductions were marketed using this positioning. This figure falls to just over 6% in Western Europe, where it is only the U.K. that is really showing the beginning of a similar trend to that in the U.S.

“The rise of Greek and Greek-style strained yogurts, which are inherently higher in protein than standard lines, has paved the way for the positioning of yogurts on a high-protein platform,” according to Lu Ann Williams, Director of Innovation at Innova Market Insights. “Although most of these are also ‘probiotic,’ once also a key marketing positioning, problems over health claims in this area have caused companies to divert attention away from digestive health in many instances; often toward nutrient content. This has tended to lead to a focus on the higher protein content of Greek-style products, alongside the traditional focus on their creamy and indulgent image,” she adds.

In the U.S., where the booming interest in Greek and Greek-style yogurts was first apparent, there has been increasing focus on the higher protein content of this kind of product. A new so-called “brogurt” sub-category has started to appear in the wake of this, with an increasing number of launches appealing more specifically to men, particularly those interested in fitness. Powerful Yogurt in the U.S. claimed to have introduced the first Greek yogurt for men in March 2013, featuring a larger “man-sized” 8-ounce cup and 25g of natural protein per pot.

There is also rising activity in emphasizing the protein content of non-Greek-style yogurts. A softer approach to claims in the EU in the wake of the health claims legislation has resulted in rising interest in products offering a more general health and well-being image, and this can also include a focus on protein content as one of a range of benefits. An early entrant in this area of the market is Emmi, which launched its Good Day range in Switzerland in mid-2013, encompassing reduced-fat, high-protein and lactose-free yogurt, yogurt drinks and milk.

Other developments include the launch of frozen yogurt options with a high-protein positioning, such as ProYo in the U.S., and other strained (but not Greek or Greek-style) high-protein yogurt options. These include Smari Icelandic yogurt brand, which was launched in the U.S. in mid-2013 and a new Protein variant of General Mills’ Yoplait Go Gurt children’s hand-held yogurt brand; offering twice the protein of the standard range.

“With high-protein foods one of the most sought-after nutritional choices at the moment, and the need for strained yogurt to find new ways of promoting itself in the wake of difficulties over the ‘Greek’ descriptor in some instances, the high-protein yogurt market seems ripe for further development,” Ms. Williams concluded.
Related Searches
Related Knowledge Center
Suggested For You 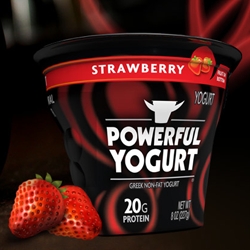