Pungent Potential for Wasabi in Nutraceuticals

The spiciness that has defined this sushi condiment is the key to many potential health benefits. 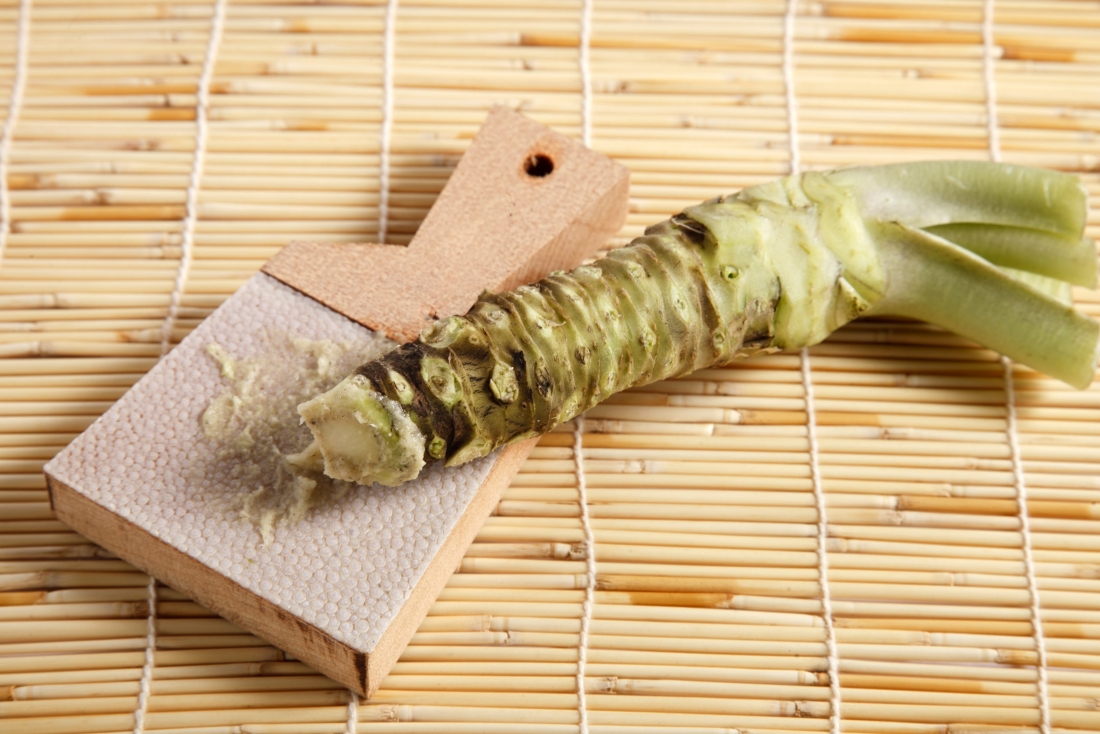 Wasabi is a rare, delicate Japanese Horseradish (Wasabia Japonica). Like most things rare and delicate, Wasabi demands specific conditions to thrive. Wasabi naturally grows alongside mountain streams, with specific humidity, temperature and drainage requirements. During the last few decades, agronomists have managed to grow Wasabi outside of Japan in flooded fields, well-drained soil and greenhouse settings. Wasabi is so revered and difficult to grow, a shield of secrecy blankets most Wasabi commercial farms. Specialty Wasabi growers are found in a few countries around the globe such as Canada, Taiwan, China, Japan, the U.S. and New Zealand.

The Wasabi plant is comprised of leaves, rhizomes, petioles and a root system. The prized “rhizome” is the stock of the plant and is used for preparing fresh Wasabi paste. While the rhizome looks like a thick root, it is actually a stem. Sushi chefs grate the rhizome with a sharkskin grater, known as an “oroshi,” which gently shaves the stock, activating its unique pungent volatiles. The plant has large green leaves connected by petioles to the rhizome and small roots that grow off of the rhizome. Fortunately, all parts of this finicky plant are edible. The leaves, petioles and roots can be consumed raw, but they most often find their way into shelf stable commercial products.

The “Wasabi” most people are familiar with is a spicy, pungent green paste mass marketed as a condiment. This imitation Wasabi is a concoction of horseradish, mustard and green food coloring with a few preservatives mixed in. Imitation Wasabi is often served alongside sushi and soba noodles but it is also used as a potent flavoring agent in a diverse array of foods such as snack foods, ice cream and mayonnaise.

“True Wasabi” is also pungent, but slightly sweeter and less harsh tasting than its readily available “imitation.” Freshly, prepared Wasabi is also used as a condiment, but it’s found in select premium restaurants and markets due to its scarcity and exclusive pricing.

Wasabi has recently become available in the nutraceutical industry (Your Wasabi Farms) in a capsule form for its impressive list of medicinal properties.

Wasabi is part of the cruciferous vegetable family, named because of its four flower petals that resemble a cross. Other notable cruciferous vegetables include broccoli, cauliflower, kale, turnip, brussel sprouts, mustard, arugula and radish. This family differentiates itself from other vegetables due to its high concentration of glucosinolates (GSLs), which are quickly converted to isothiocyanates (ITCs). Many of the ITCs found in this family of vegetable are regrettably lost during routine cooking (e.g., heat application and chopping).

ITCs are a class of compounds responsible for Wasabis’ pungency. These compounds are formed when their precursor, GSLs interacts with the enzyme myrosinase and water. The main pungent compound of Wasabi is allyl isothiocyanates (AITC). Other isothiocyanates are believed to give Wasabi its “fresh green” flavor (methylthioalkyl isothiocyanates). There are numerous other ITCs that have been found in the wasabi plant. Many of the longer chain ITCs found in Wasabi (and not other cruciferous vegetables) are believed to be particularly healthful.

The trouble with ITCs is they dissipate quickly once the plant cell has been disrupted (e.g., cutting, chewing, crushing). In fact, within minutes of preparation, Wasabi paste loses its trademark bite. Therefore, sushi chefs must prepare “shredded Wasabi paste” only moments before consumption. As you might imagine, this poses a major challenge for food producers. Thanks to modern processing technology, there are a few ways to prevent ITCs from volatizing prior to consumption. One such way is to drive the water off of the plant without crushing the cell walls prior to processing (by freezing and drying technologies). The ITCs are eventually activated when water is reintroduced into the product (by ingestion).

Despite its high maintenance demands, and unique processing challenges, Wasabi is indeed worth pursuing as a crop. While its taste and delicacy are every foodie’s dream, the health benefits of Wasabi have garnered attention from researchers around the globe.

For 1,000 years, Japanese have paired sushi with Wasabi for reasons that likely go beyond taste. Wasabi has many potent antimicrobial, fungicidal and pesticidal properties. Careful scientific studies have shown Wasabi is effective at reducing microbial counts of many bacteria that have been implicated in serious food borne illnesses such as E. coli, Salmonella typhimurium, H. pylori, Listeria monocytogenes, and Vibrio parahemolyticus.

Strict health regulations, combined with modern frozen storage have assisted in minimizing the risk of food borne illness and sushi consumption. However, food borne illness remains a costly burden to society. One company has recognized the antimicrobial power of Wasabi and has designed a microencapsulated paper that keeps food fresher, longer.

Health Benefits
There has been some exciting research surrounding the health benefits of Wasabi.

More recently, Morimitsu and colleagues characterized Wasabi for its antiplatelet aggregation effect in human platelets, showing powerful anti-platelet aggregation and anti-cancer properties. The authors identified the longer chain ITCs (specifically, 6- MSITC) as being the ITC responsible for these properties. This implies Wasabi may be effective in combating stroke and heart attacks, a major killer in the western world.

Other studies have been less conclusive. Higdon et al suggested the lack of association between some cruciferous vegetable consumption and anti-cancer studies may be due to genetic variation of the participants.

Feeding trials with human subjects have shown that hydrolysis of GSLs and absorption of ITCs are greater following ingestion of raw cruciferous with active plant myrosinase than after consumption of the cooked plant with denatured myrosinase.

Recognizing that ITCs are incredibly volatile paired with the diversity of food preparation options available to people, its reasonable to assume, many consumers are not preparing their GSL rich foods in a way that would optimize ITC consumption. Consumers are likely minimizing their ITC consumption by inactivating the enzyme by heat application or from volatizing ITCs prior to consumption by finely chopping their food.

The digestive fate of GSLs may be further influenced by the extent of cell rupture during ingestion, gastrointestinal transit time, meal composition, individual genotype and differences in colonic microflora. These sources of variation may partly explain the conflicting epidemiological evidence relating consumption of cruciferous vegetables to cancer prevention.

An understanding of the biochemical changes occurring during cooking and ingestion of cruciferous vegetables may help in the design of more robust epidemiological studies to better evaluate the protective effects against cancer.

Anti-Inflammatory. The same long chain ITCs believed to have anti-cancer effects in Wasabi through various signaling pathways, are also believed to play a role in anti-inflammation. While all of the cruciferous vegetables have ITCs, Wasabi differs in that it contains higher long chain ITCs. The long chain ITC analogue known as 6- methylsulfinyl hexyl isothiocyanates (6-MITC/6-MSITC) has potent biological processes that are anti-microbial, anti-platelet, anti-cancer and anti-inflammatory.   6-MITC is found throughout the plant, but the highest concentrations are found in the rhizome.

Conclusion
Wasabi is a remarkable plant. The pungent kick that has defined this spicy sushi condiment for 1,000 years is the surprising key to so many potential health benefits. While only a few have the opportunity to consume fresh wasabi daily, the nutraceutical industry has the opportunity to encapsulate products for more convenient delivery to consumers.

Jill Richardson, PhD, has worked in the food industry for 15+ years in a variety of roles. For more information: jill_richardson@sensunresearch.com.
Related Searches
Related Knowledge Center
Suggested For You