According to consumers, the sweeping changes they’ve made to their nutrition routines are likely to be sustained. 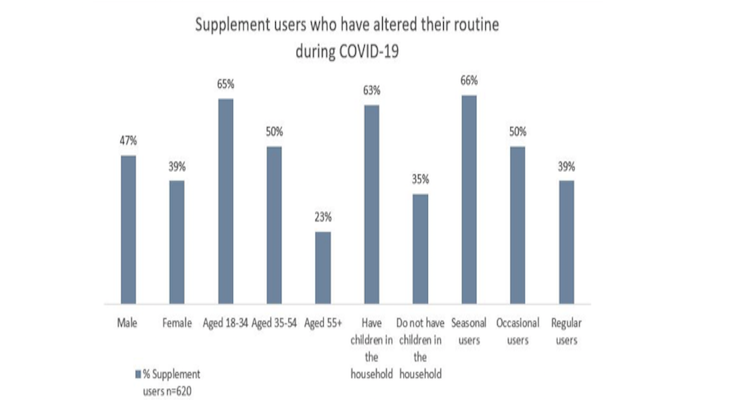 The Council for Responsible Nutrition (CRN) shared some of its topline results from a survey of supplement users, and non-users, conducted jointly by CRN and market research company Ipsos, which highlighted some statistical trends in regard to the dramatic rise of dietary supplement usage seen since the onset of the COVID-19 pandemic. The survey was fielded beginning on July 31 and ending on Aug.4, and contains data from a national sample of 2,004 adults living in the U.S. 1,488 of the respondents said they were dietary supplement users, and 620 of those users reported changing their routines since the onset of the pandemic.

More than two in five (43%) supplement users report that they’ve changed their routines since the beginning of the pandemic, with 91% of those changes being an increase in supplement intake, such as by adding new supplements to their existing routines (46%), taking the same supplements more regularly (25%), or increasing doses (22%).

“As consumers continue to confront the devastating public health effects of COVID-19, Americans are focused more than ever on their overall health and well-being,” Brian Wommack, senior vice president of Communications for CRN, said. “As evidenced in the survey, dietary supplements continue to play a critical role in the lives of most Americans, and even more so in light of the ongoing health crisis. More than three quarters of Americans report taking dietary supplements and the overwhelming majority of supplement users, 83%, believe these products play an important role in helping to support health and wellness during COVID-19.”

The top two reasons why supplement routines have been increased, according to the survey, was for overall immune support (57%) and health/wellness benefits (53%). 42% specifically cited reducing the risk of serious illness as a reason, while 34% said that they sought to take greater control over their health.

An 85% majority of Americans who participated in the survey said that the pandemic is a reminder to take care of their overall health. Interestingly, supplement users were more likely to report engaging in other healthy habits, such as staying hydrated, eating healthy, exercising regularly, and managing stress, than their non-user counterparts.

In addition to the COVID-19 survey, CRN reports that its annual Consumer Survey on Dietary Supplements is slated for later this fall – both surveys will be available for purchase to CRN members and non-members alike.